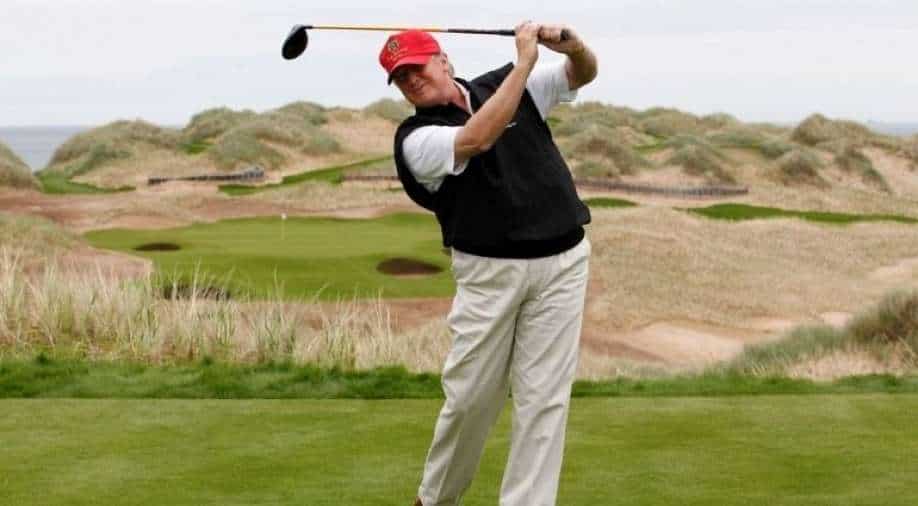 Former US President Donald Trump practices his swing at the 13th tee of his new Trump International Golf Links course on the Menie Estate near Aberdeen, Scotland Photograph:( AFP )

Former US President Donald Trump's golf courses claimed over $4 million in the furlough money of the UK government.

The turnover of his resorts in Ayrshire and Aberdeenshire was reduced by 50 per cent of what they used to earn.

In 2020 alone, Trump's leisure business in Balmedie reported a setback of $1.7 million.

Its report states "The UK government furlough scheme was helpful to retain as many jobs as possible, and the majority of employees were reinstated over the course of the year."

Trump, after decades of buying properties with debt, spent more than $300 million in cash purchasing and developing the Scottish courses, neither of which has turned a profit.

The Scottish parliament had rejected a call for the government to investigate how Donald Trump funded his purchase of two golf courses in Scotland.

Avaaz, a global human rights group, has filed a petition in Scotland’s highest civil court seeking a judicial review of the government's decision.

Britain introduced "unexplained wealth order" in 2018 to help authorities target the illicit wealth of foreign officials suspected of corruption and those involved in serious crimes.

However, they merely compel an individual to explain the source of their wealth but can pave the way for authorities to seize assets.

In 2006, Trump bought 1,000 acres in Aberdeenshire for more than $10 million. Since then, he’s spent another $60 million building a golf course, a small hotel, and a handful of holiday cottages, according to company filings with the UK corporate registry.

The Trump Organisation has said in public statements and filings that it has spent a total of more than $140 million on the development.

Trump, an avid golfer whose mother was Scottish, made a bigger investment in Turnberry, a seaside course that has four times hosted The Open - Europe's only golf major.

In 2014, he bought Turnberry’s course and resort for $60 million. Company filings in the UK show that Trump’s company spent another $100 million on course upgrades and other expenses.