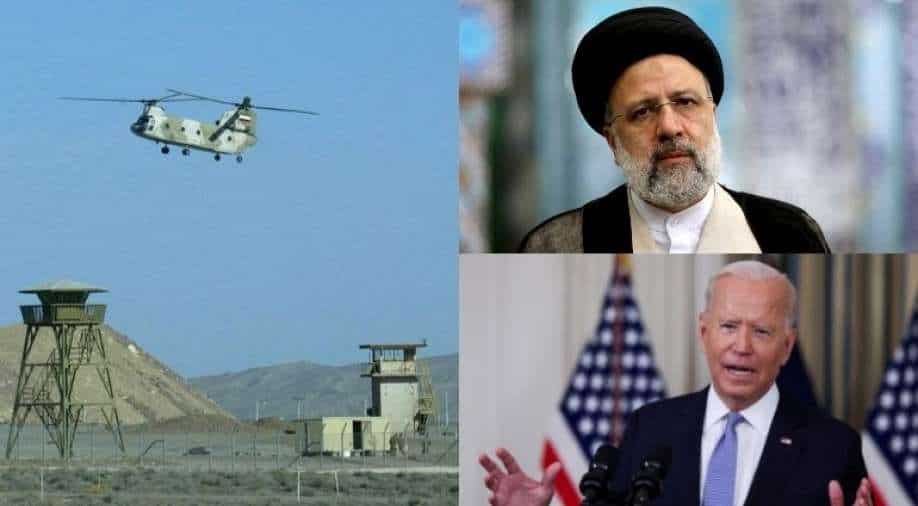 Iran's President Ebrahim Raisi along with US President Joe Biden and the Natanz nuclear plant in Tehran Photograph:( Agencies )

According to him, "Some actors persist in their blame game habit, instead of real diplomacy. We proposed our ideas early, and worked constructively and flexibly to narrow gaps."

"Diplomacy is a two-way street. If there's a real will to remedy the culprit's wrongdoing, the way for a quick, good deal will be paved," he added.

Kani highlighted that "time is running out" and the pact will become "an empty shell" without progress in negotiations.

The 2015 agreement ensured sanctions relief in return for tight curbs on Iran's nuclear programme, which was put under extensive UN monitoring.

Former US President Donald Trump pulled the US out of the accord in 2018. US President Joe Biden restarted negotiations for Washington's return after the election of hardline cleric Ebrahim Raisi.

"The two parties are at the point of agreeing on the matters which should be on the agenda," Kani said.

"It's a positive and important evolution since, at the start, they weren't even in agreement on the issues to negotiate."

Iran claims it only wants to develop a civilian capability but Western powers say its stockpile of enriched uranium goes well beyond that, and could be used to develop a nuclear weapon.

US Secretary of State Antony Blinken said that Washington continues to pursue diplomacy with Iran because "it remains, at this moment, the best option", but added that it was "actively engaging with allies and partners on alternatives".

Chances of an agreement between the arch-foes seem remote as significant gaps still remain between the nations on some key issues, such as the speed and scope of lifting sanctions and how and when Iran will reverse its nuclear steps.

With Israel pushing for a tough policy if diplomacy fails to rein in Iran’s nuclear work, stakes are are high as failure in the negotiations would carry the risk of a new regional war.