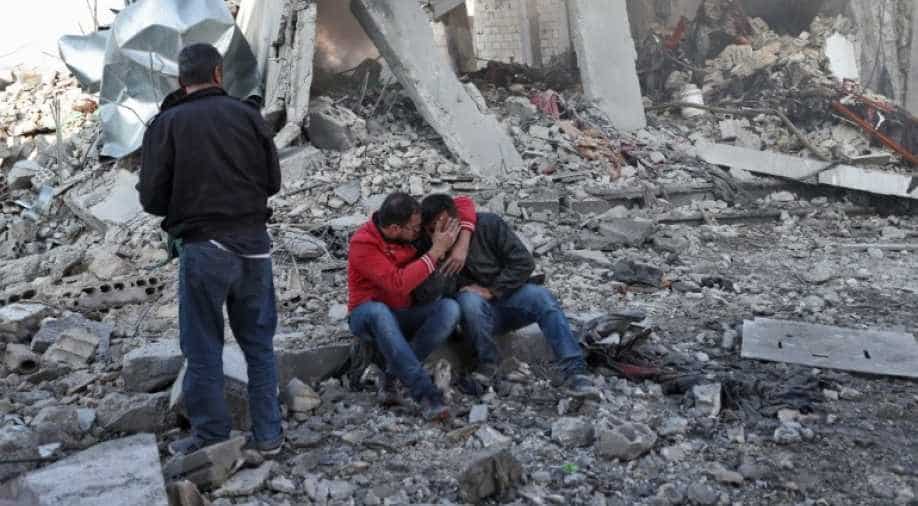 A Syrian man comforts another on the rubble of a building after a reported Russian airstrike on a popular market in a Syrian village Photograph:( AFP )

Earlier this month, Russia denied launching any combat operations in the region since a ceasefire it agreed with rebel supporter Turkey went into effect on January 12.

Airstrikes killed 10 civilians near a bakery and a medical clinic in Syria's rebel-held Idlib region on Thursday, as government forces kept up a ground offensive.

The Britain-based Syrian Observatory for Human Rights said Russian warplanes hit the Idlib province town of Ariha, but the Russian defence ministry said its "aviation did not carry out any combat tasks in this area of Syria."

The government and its Russian allies have upped their deadly bombardment of Syria's last major rebel bastion, slowly chipping away at it from the south.

Rebel-held territory has shrunk to just over half of Idlib province, along with slivers of neighbouring Aleppo and Latakia, following a series of government gains.

Early on Thursday, Russian airstrikes hit near a bakery and the Al-Shami clinic in Ariha which is now out of service, the Observatory said.

The monitor says it determines whose planes carried out strikes according to type, location, flight patterns and munitions.

Nearby, three entire buildings had collapsed and several vehicles were reduced to mangled wrecks.

The latest deaths bring to 21 the number of civilians killed by Russian airstrikes in Idlib since Wednesday, the Observatory said.

Earlier this month, Russia denied launching any combat operations in the region since a ceasefire it agreed with rebel supporter Turkey went into effect on January 12.

But the truce has since become a dead letter and the number of reported Russian raids has risen sharply in an area dominated by jihadists of the Hayat Tahrir al-Sham alliance.

It was a rare critical remark from Erdogan, who has largely sought to keep good relations with Russian President Vladimir Putin since a 2016 rapprochement.

Thousands of Russian troops are deployed across Syria in support of the army, while a contingent of Russian private security personnel also operates on the ground.

Moscow's military intervention in 2015, four years into the Syrian conflict, helped keep President Bashar al-Assad in power and started a long, bloody reconquest of territory lost to rebels in the early stages of the war.

Government forces pushed north from Maaret al-Numan, on Thursday towards the town of Saraqib, whose residents have mostly fled in the face of heavy bombardment.

The front line is now within five kilometres of the town, the Observatory said.

Both Maarat al-Numan and Saraqib lie on the key M5 highway connecting the capital Damascus to second city Aleppo.

The road has been in the government's sights as it seeks to revive a moribund economy ravaged by almost nine years of war.

Some 50 kilometres of the M5 remain outside regime control, the Britain-based Observatory said.