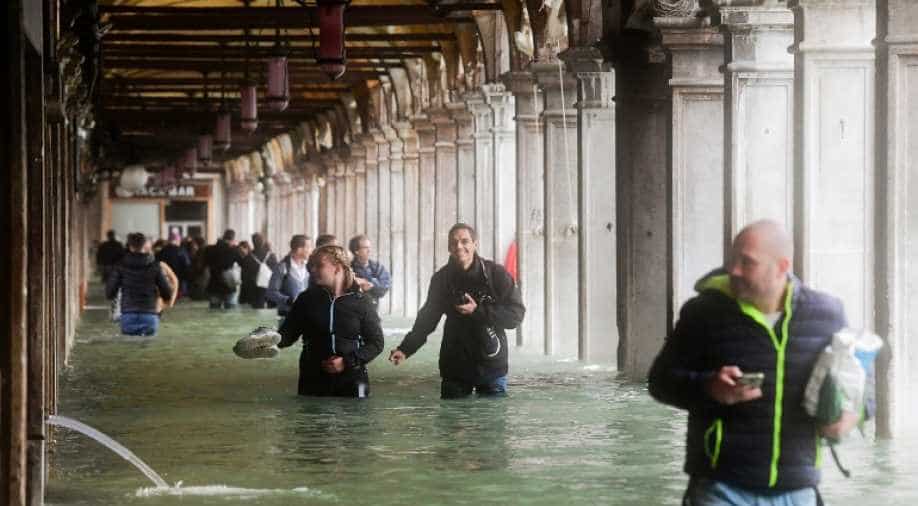 The waters have only topped 150 centimetres five times before in recorded history. Nearly all of northern Italy was on alert due to the storms, with wind gusts up to 100 kilometres per hour.

At least five people died Monday in Italy as fierce winds and rains lashed much of the country and caused waters in the canal-ringed city of Venice to reach historic high levels.

Falling trees killed two people in their car not far from Rome, a man south of the capital and another in the Naples region, authorities said.

Near Savona in the northwest meanwhile, a falling piece of cornice struck and killed an elderly lady.

Elevated wooden platforms usually placed on main passageways in the Renaissance city were not high enough to ensure safe passage in the low-lying square.

Families carried children on their shoulders through the surrounding streets. While some tourists donned thigh-high wellies, others had opted to take off their shoes and wade through the water.

The waters have only topped 150 centimetres five times before in recorded history. In 1966, when floods swept through the country, famously devastating Florence's historic centre, the waters reached 194 centimetres in Venice.

Nearly all of northern Italy was on alert due to the storms, with wind gusts up to 100 kilometres per hour and rainfall in some places equivalent to the amount that falls over several months.

Luca Zaia, head of the Veneto region, said the situation could be worse than when huge floods struck in 2010.

"The ground is already saturated with water, the rivers are full and due to sirocco (a strong hot wind from Northern Africa), the sea is not absorbing (the waters), he said.

Schools were closed in Genoa, Rome and Veneto, as well as in several northern towns and the Sicilian port of Messina.