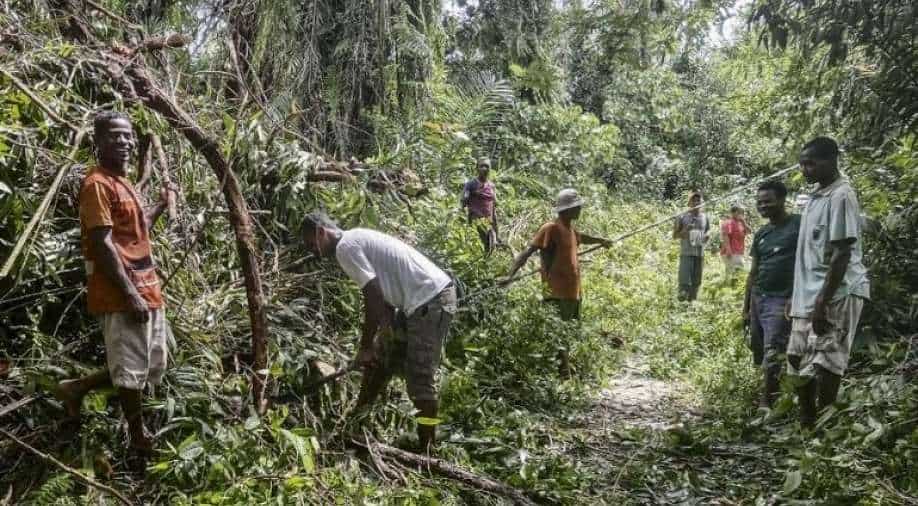 Residents of Mahanoro are seen clearing the damages caused by the passage of cyclon Batsirai on Sunday. Photograph:( AFP )

The cyclone gained strength as blew across the Indian Ocean, with gale-force winds reaching peaks of 235 kilometers (145 miles) per hour, according to the island's meteorology department

The center of the tropical storm landed near Mananjary, on the east coast, and moved inland across the island.

The cyclone gained strength as blew across the Indian Ocean, with gale-force winds reaching peaks of 235 kilometers (145 miles) per hour, according to the island's meteorology department.

Batsirai, which means help in the Shona language, is classified as a dangerous storm and officials have warned it could inflict "significant and widespread damage, particularly flooding in the east, the southeast and the central highlands," said the department in a statement.

As a precaution, 22,000 people have already been evacuated to gymnasiums, schools or churches, especially around Mananjary, on the east coast.

"The wind is getting stronger and there is a lot of rain. The sea is very rough. There are big waves that come down with a lot of force," Capt Ravahalahy Heninjoa, commander of Mananjary's gendarmerie, said on Saturday.

The winds have toppled many trees, and electricity has been cut since Friday night, he said.

Further inland, Antananarivo, the capital, experienced rains ahead of the cyclone and residents put sandbags on their roofs to protect against the winds.

Anticipating widespread destruction, most land and sea transport has been suspended on Madagascar, the world's fourth-largest island.

"Almost all regions of the island are at risk," the National Office for Risk and Disaster Management said, warning that the cyclone threatens nearly 600,000 of the island's 28 million people.