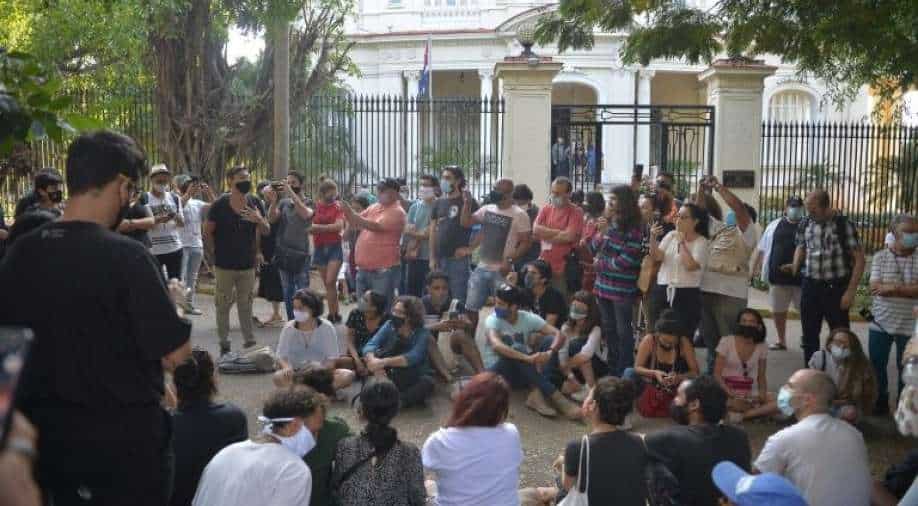 The demonstration followed the expulsion by authorities on Thursday night of protesting members of an artists' collective from their premises in the historic center of Havana.

About 200 Cuban artists demonstrated outside the country's culture ministry on Friday in a rare show of dissent over freedom of expression.

The demonstration followed the expulsion by authorities on Thursday night of protesting members of an artists' collective from their premises in the historic center of Havana.

Protesters demanded a dialogue over limits on freedom of expression and what they call state repression after the authorities cracked down on the San Isidro Movement of dissident artists and activists.

The Dutch and Czech governments and Amnesty International, as well as other rights groups, voiced concern on Friday about human rights in Cuba.

The movement has been protesting the imprisonment of a rapper on charges of contempt, casting a spotlight on the one-party state's treatment of human rights. Eight members and allies went on hunger strike 10 days ago.

Authorities broke up the strike on Thursday, evicting everyone from the movement`s headquarters, citing a violation of COVID-19 health protocols. The dissidents said this was a pretext to end their protest.

Fourteen dissidents, including five still on hunger strike, were briefly detained. They said their phones had been seized and reset, deleting images of the move against them.

The San Isidro Movement, named after the rundown neighborhood in Old Havana where the group has its headquarters, was founded in 2018 to oppose a decree they said increased censorship on the cultural sector.

The stakeout, starting with two dozen people in the morning, grew to more than 100 as the day went on, including internationally renowned Cuban artists like Tania Bruguera and filmmakers like Fernando Perez.

Late into the evening, the protesters said they were refusing to leave until they had met with a high-level official. They demanded "dialogue" and representatives were waiting to meet with vice minister Fernando Rojas after having gathered there for much of the day.

The demonstration was rare in Cuba, where permission for such protests is not often given.

Security personnel and uniformed police watched over the protest from a distance but without intervening.

The San Isidro Movement had been demanding the release of another member of the group, rapper Denis Solis, arrested on November 9 and sentenced to eight months in prison for contempt.

After the raid on their premises, the 14 members of the group were given Covid-19 tests and returned to their homes, with the collective's headquarters closed by the authorities, activists said on social media.

Two of them refused to go home and were arrested again: Luis Manuel Otero Alcantara, 32, a plastics artist, and Anamely Ramos, 35.

Some activists said on social media that Ramos had been released.

The list of demands from Friday's protesters included information on the whereabouts of Otero and Ramos, the release of Solis and an end to the "harassment" of artists.