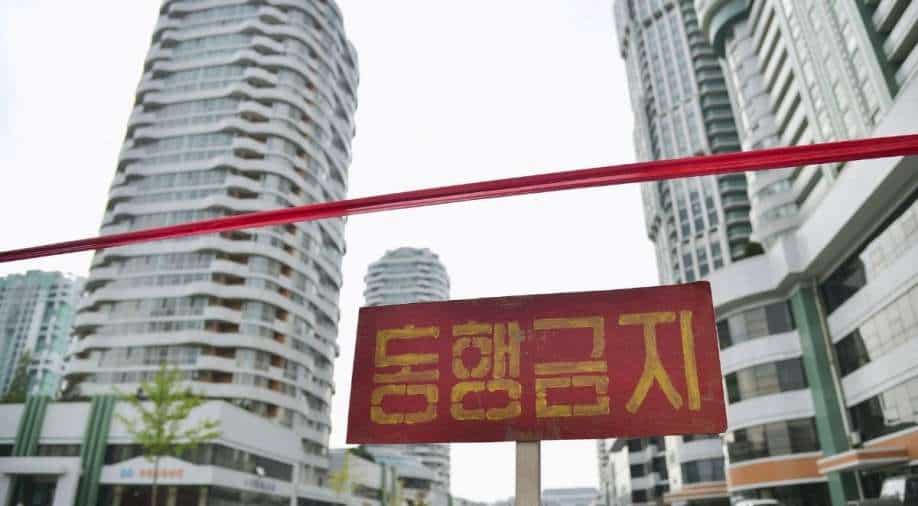 A sign is seen on a street closed to traffic, amid growing fears over the spread of the coronavirus disease (COVID-19), in Pyongyang, North Korea, in this photo released by Kyodo on May 18, 2022. Photograph:( Reuters )

Recently, US President Joe Biden said that America had offered Covid vaccines to North Korea. However, there's no response yet

North Korean state media reported on Sunday that for the first time in nearly 10 days, the "fever" cases in North Korea cases dropped below 200,000. North Korea recently acknowledged the coronavirus (COVID-19) outbreak and announced that measures were taken to curb the spread.

However, concerns were raised globally as in the absence of adequate facilities, the Covid outbreak could wreak havoc in the country.

North Korea, which has refused to take help from outside, might face issues like a shortage of vaccines and medical equipment, food crisis in the country, etc.

ALSO READ | Covid curbs may be why North Korea is mum on vaccine offer: US official

World monitoring bodies are also struggling to assess the current Covid condition in North Korea as the country has not confirmed the total number of people testing positive for the coronavirus.

So far, it has been revealed by state news agency KCNA that more than 186,090 additional people had fever symptoms and one more person had died. the agency also noted that more than 2 million of the 2.6 million cumulative cases had recovered. In North Korea, the official death toll stands at 67.

KCNA said, using the initials of North Korea's official name: "The current situation of the epidemic spread in the DPRK shows a positive trend away from a rapid growth in the beginning to a decline after being stably controlled and managed, registering daily increased number of recoveries across the country."

Recently, US President Joe Biden said that America had offered Covid vaccines to North Korea. However, there's no response yet.

"We've offered vaccines, not only to North Korea but to China as well, and we're prepared to do that immediately. We've got no response," Biden at a press conference in Seoul during his Asia tour.