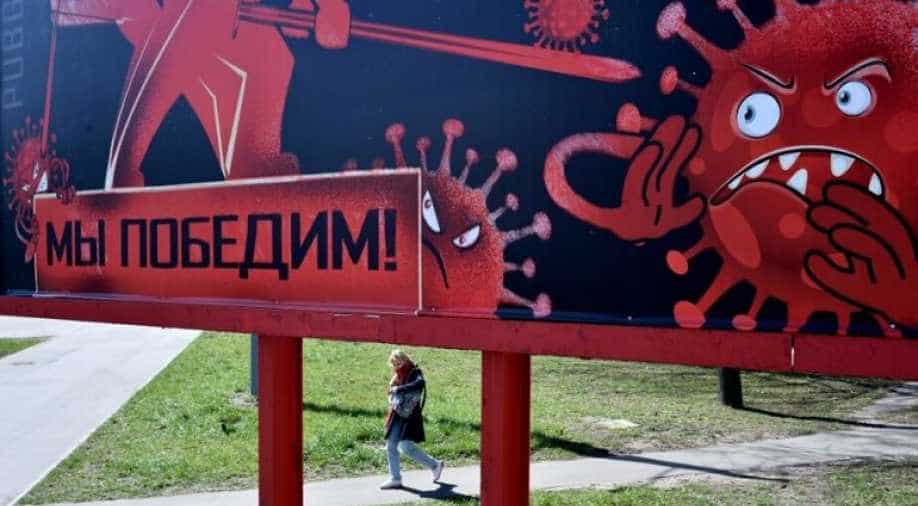 A woman walks past a sign depicting a virus and reading "We will win" in Minsk on April 11, 2020 during the COVID-19 outbreak, caused by the spread of the novel coronavirus Photograph:( AFP )

A leaked intelligence dossier categorically states that China's secrecy amounts to a cover-up. It mentions a long list of crimes by the Chinese regime.

There's no doubt that this virus came from China. The question that should be asked now is this--- was the outbreak deliberate or by accident? Was it an act of war or an outcome of Chinese incompetence?

A leaked intelligence dossier categorically states that China's secrecy amounts to a cover-up. It mentions a long list of crimes by the Chinese regime.

The dossier says that one of the estimated 50 virus samples at the Wuhan Institute of Virology has a 96 per cent genetic match to COVID-19. The genetic sequence of the COVID-19 matches almost completely with a virus sample at the Wuhan lab.

The dossier also talks about work done by Wuhan-based scientists to 'synthesise' sars-like coronaviruses. It means that they were creating this virus. Chinese scientists were altering parts of the virus to see if it could be transmitted from bats to other species. The dossier talks about the 'suppression of evidence'. It raises questions about why wildlife markets were bleached and the disappearance of some doctors.

The dossier states that China censored news of the virus on search engines and deleted coronavirus-related terms from social media.
It raises a very pertinent question. Despite evidence of human-to-human transmission in early December, why did the Chinese regime deny it till the 20th of January?

The dossier concludes that China intentionally hid evidence of the coronavirus pandemic. The dossier is indeed damning of china's constant denials about the outbreak.