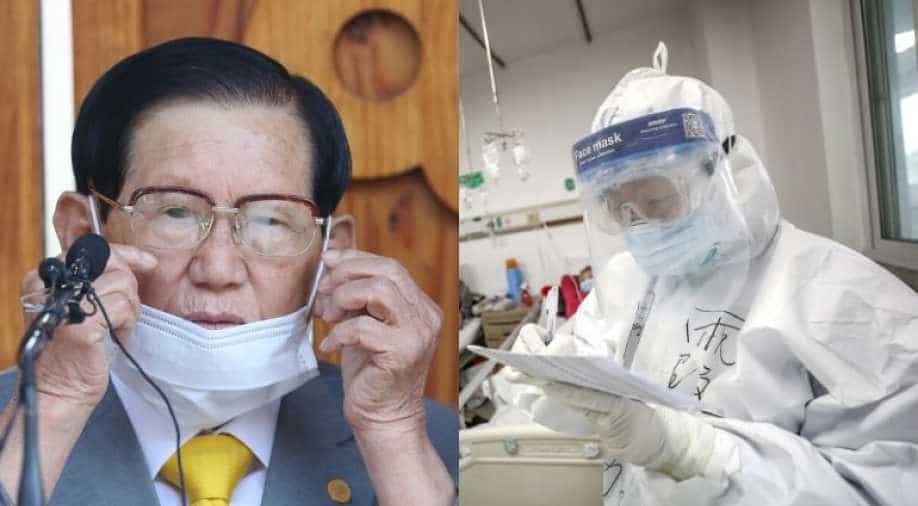 Lee Man-hee, leader of the Shincheonji Church of Jesus and an image of doctors checking patients of coronavirus Photograph:( AFP )

The leader of the secretive South Korean sect linked to more than half the country's 4,000-plus coronavirus cases apologised on Monday for the spread of the disease.

Prosecutors are deciding whether to investigate the founder and top leaders of Shincheonji church of Jesus, whose members account for nearly 60 per cent of the country’s more than 3,500 confirmed cases of the novel coronavirus, on murder and other charges.

Seoul officials asked for the inquiry, accusing the church’s leaders of contributing to South Korea's rising death toll, now at 18, by failing to provide an accurate list of church members and by interfering with the government’s efforts to fight the outbreak.

The leader of the secretive South Korean sect linked to more than half the country's 4,000-plus coronavirus cases apologised on Monday for the spread of the disease.

"I would like to offer my sincere apology to the people," said Lee, his voice breaking.

"Although it was not intentional, many people have been infected," the 88-year-old said, twice getting to his knees to bow before reporters in Gapyeong, his head to the floor.

"I seek the forgiveness of the people."

The plea for forgiveness for Shincheonji's head Lee Man-hee came after Seoul city authorities filed a murder complaint against him for failing to cooperate in containing the epidemic.

Seoul's city government has asked prosecutors to press charges including homicide against Lee and 11 other leaders after the sect was accused of submitting false lists of its members to authorities.

For its part, the sect insisted that it was "actively cooperating with the government" and its members face social stigma and discrimination if their beliefs become publicly known, dissuading some from responding to official inquiries.