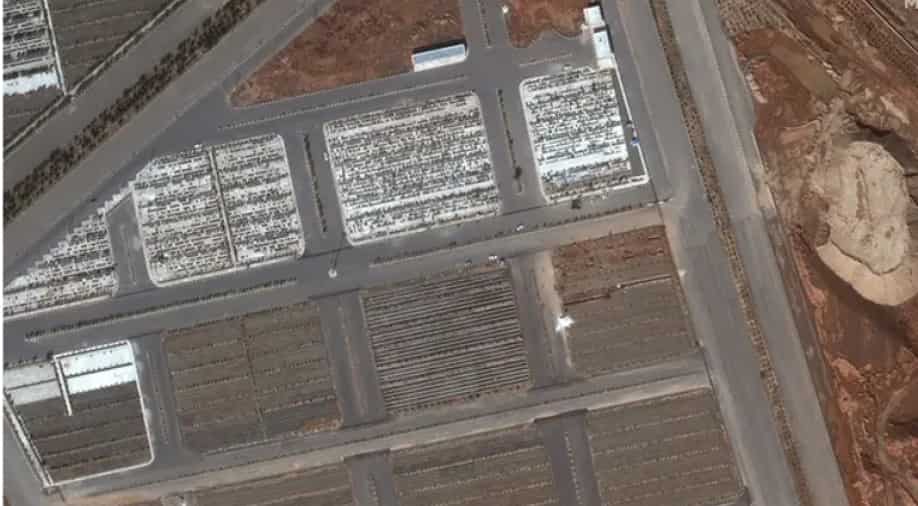 The death toll in Iran has now reached 514 with at least 11,364 people infected. The outbreak in Iran is one of the deadliest outside China, where the disease originated

As Iran reported 85 new deaths due to coronavirus, satellite pictures from the city of Qom have reportedly revealed two newly dug burial trenches - about 90 metres long.

The trenches were reportedly dug in late-February, when there was a sudden surge in infections in Iran, adding to the suspicions is the picture which shows a mound of lime right next to the trenches.

Iranian authorities have already admitted to using lime to bury coronavirus casualties. There are reports that claim lime actually slows the decaying process and prevents the spread of infection.

The country has been facing an acute shortage of funds and supplies due to the crippling US sanctions with health workers unable to access to safety equipment.

Foreign minister Javad Zarif had admitted that Iran was unable to free up funds by exporting oil and that the sanctions were impeding the import of medicines.

The death toll in Iran has now reached 514 with at least 11,364 people infected. The outbreak in Iran is one of the deadliest outside China, where the disease originated.

Iran's wishlist includes N95 masks, ventilators, surgical gowns, testing kits and portable x-ray machines. In fact, the situation has deteriorated to such an extent that Iran has requested a $5 billion loan from the international monetary fund(IMF).

The last time the IMF granted Iran such a loan was in 1960 - 19 years before the Ayatollah came to power. On its part, the IMF has promised to proceed with the request in line with its policy.

Even President Trump offered to help the Iranian government saying all Tehran had to do was ask for it, however, it was two weeks back and the situation has become considerably worse for Iran since then.