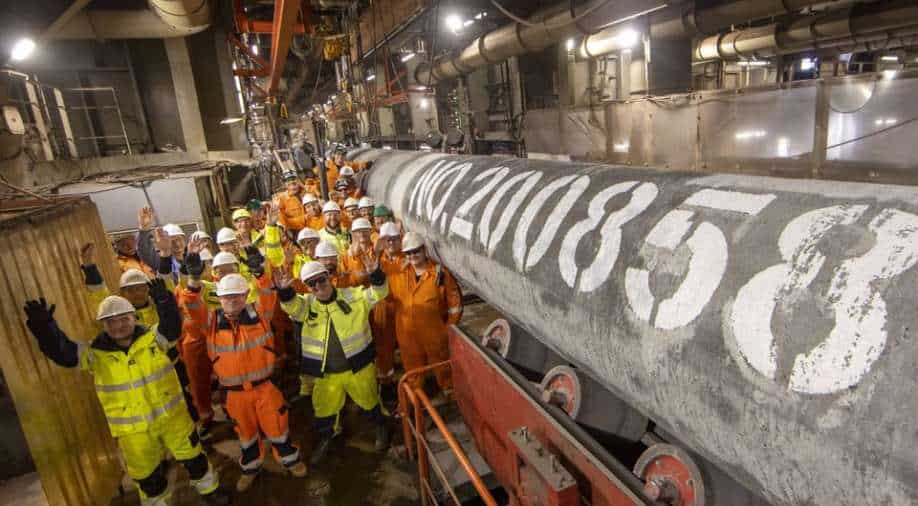 Specialists pose for a picture after welding the last pipe of the Nord Stream 2 gas subsea pipeline onboard the laybarge Fortuna in German waters in the Baltic Sea, September 6, 2021. Photograph:( Reuters )

Gazprom said on Friday it had finished construction of the Nord Stream 2 subsea pipeline to Germany, allowing Russia to potentially double lucrative gas exports to Europe via the Baltic Sea while bypassing and cutting off a source of income for political foe Ukraine.

On September 10, Russia's state-controlled gas giant claimed it has completed construction of the Nord Stream 2 gas pipeline to Germany, a disputed project opposed by Ukraine and the United States.

The construction of Nord Stream 2 was completed on Friday morning, according to Gazprom, which declared so in a statement on the Telegram messaging app, quoting company CEO Alexei Miller.

Nord Stream 2, owned by Gazprom and backed by other European firms, is being built beneath the Baltic Sea, bypassing Poland and Ukraine, which has sparked protests in both countries.

The new pipeline has been regarded by Ukrainian President Volodymyr Zelenskyy as a strong geopolitical weapon for Russia, which annexed Ukraine's Crimean Peninsula in 2014 following the fall of the former Kremlin-friendly president and has backed a separatist insurgency in eastern Ukraine.

Washington has been a vocal opponent of Nord Stream 2, but the Biden administration has chosen not to penalise the German corporation in charge of the project while imposing penalties on Russian companies and ships.

The US and Germany negotiated an agreement in July to allow the completion of Nord Stream 2 without the imposition of US penalties on German firms.

The US and Germany agreed to fight any attempt by Russia to use the Nord Stream 2 pipeline as a political weapon under the parameters of the July 21 agreement.

They also decided to provide financial assistance to Ukraine and Poland in the form of alternative energy and development initiatives.