The Ebola epidemic in the country's volatile east has killed 2,280 people since August 2018, and officials had hoped to be able to proclaim it over on June 25

Amid the ongoing coronavirus pandemic which continues to decimate economies and kill scores of population across the globe, a new kind of medical storm is brewing in a Central African country - Democratic Republic of Congo.

A new outbreak of Ebola was reported in the country’s northwestern areas, news agency AFP reported. The country is currently dealing with the coronavirus outbreak in the eastern parts.

Also read: In the shadow of Ebola and Covid-19, measles rips through Congo

This resurgence has taken the lives of four people in the city of Mbandaka, the Health Minister Eteni Longondo said in a press conference.

"The National Institute of Biomedical Research (INRB) has confirmed to me that samples from Mbandaka tested positive for Ebola... We will send them the vaccine and medicine very quickly" Longondo said. 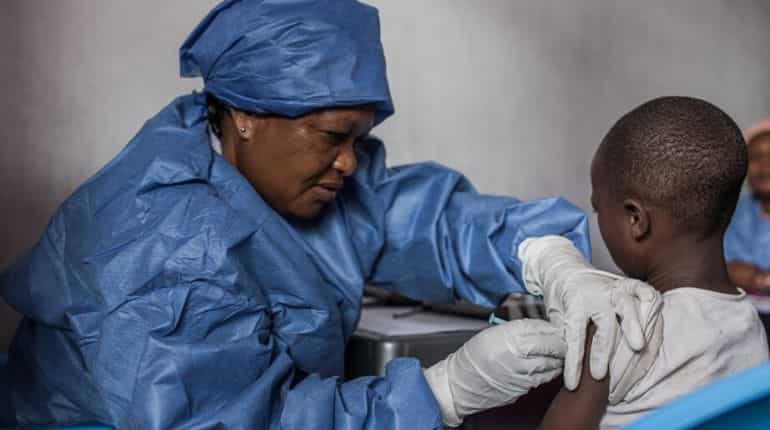 A girl is getting inoculated with an Ebola vaccine on November 22, 2019 in Goma | AFP

Mbandaka is the capital of Congo’s Equateur province, which serves as a transport hub alongside the Congo river and houses over a million people. Ebola had hit the same province in the summer months of May and July in 2018, which claimed the lives of 33 people.

Since surfacing, the Ebola epidemic has killed 2,280 people in the country’s eastern region. The government was planning to announce the country Ebola free on June 25, but with new cases resurfacing, the country has to continue fighting it. A similar situation had come up in April this year when the country was three days away from declaring itself free of Ebola.

"This is a province that has already experienced the disease. They know how to respond. They started the response at the local level yesterday (Sunday)," Longondo said.

If no cases are reported for 42 days in a row, the country would be able to declare itself free of ebola.

This marks the eleventh outbreak in the country since 1976.

Alongside ebola, the country is battling the coronavirus pandemic, which has killed over 72 and infected over 3,000 so far.