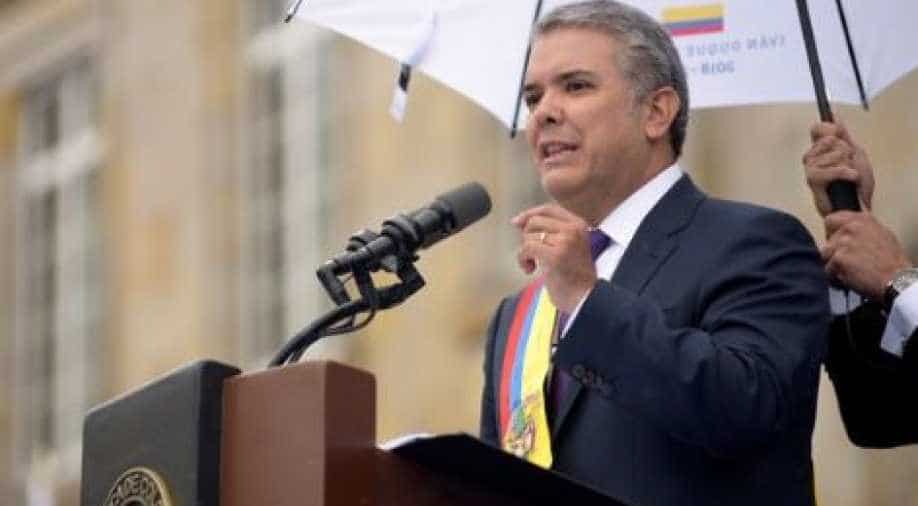 Colombian President Ivan Duque is stressing the need for international action to halt Nicolas Maduro's "dictatorship" in Venezuela, which he blames for a "massive humanitarian crisis" and a migration wave.

"The real cause of this migration shock is the dictatorship," the right-wing leader told AFP. "We must use all the diplomatic mechanisms, all the multilateral mechanisms available to allow this dictatorship to end."

During an official visit to France from November 11-13, Duque, who has been in power since August 7, will take part in Sunday's Forum for Peace organized by French President Emmanuel Macron.

Prior to his departure he urged the need for countries worldwide to fight drug trafficking, in a wide-ranging interview with AFP that also touched on peace talks with Colombia's last active guerrilla group and the election of an extreme-right leader in Brazil.

Duque accused Maduro -- leader of Venezuela, where economic woes began in 2014 with the crash in the price of crude -- of "clinging to power and exacerbating patriotic feelings in his favour."

Maduro's government has been slapped with a range of sanctions over its crackdown on the opposition and civil society critics.

The Colombian president said its neighbours "huge humanitarian crisis" is leaking over the border: "We have received nearly a million migrants in less than two years."

"Colombia is facing a difficult situation," he said, calling on the international community to help with "significant means to face this challenge."

He echoed the need for international cooperation on the issue of drug trafficking: "All countries of the world must strengthen their policies to prevent consumption," he said."

"The fight against drugs must be a shared struggle."

Illegal coca plantations in Colombia reached record levels last year following a 17 per cent increase from 2016 to around 423,000 acres (171,000 hectares), according to the United Nations.

Colombia, the world's leading producer of cocaine, is just emerging from over a half century of civil war waged by guerrillas, paramilitaries, armed forces and drug traffickers.

Asked about 2016's peace agreement between the ex-rebel Revolutionary Armed Forces of Colombia (FARC), now a political party, and the government, Duque emphasized that he "never campaigned saying that we are going to destroy the agreements."

Duque has vowed to fix "flaws" in the agreement negotiated by his predecessor, Nobel Peace Prize winner Juan Manuel Santos.

He has in particular criticized the FARC deal as being too lenient in allowing former rebels accused of atrocities to serve as lawmakers.

Duque said the "most important issue is... to ensure that those holding political representation mandates, tried by transitional justice and whose human rights violations are upheld, receive proportionate sentences and leave political office."

Concerning Colombia's last active guerrilla rebels, the National Liberation Army (ELN), Duque reiterated his position that he is "ready to sit down and speak with them if, and only if, they release all the hostages" and halt all criminal activities."

"If that does not happen, we will have to act... firmly" he continued. "In a dissuasive and offensive way."

Peace talks have been suspended since the beginning of August when Santos admitted defeat in his bid to reach a conclusion before handing over power to Duque.

The ELN has insisted that they will not suspend their insurgency until Duque names a new team of peace negotiators to restart the Cuban-hosted talks.

"Brazil is an important country for Colombia, not only because it shares a border, but for the market it represents; for its weight in regional geopolitics."

"If in Brazil, conditions are met for a government favorable to the development of the private sector, interregional trade, cross-border investments -- I think it will be a great success."

"I hope this will be President Bolsonaro's line of work."