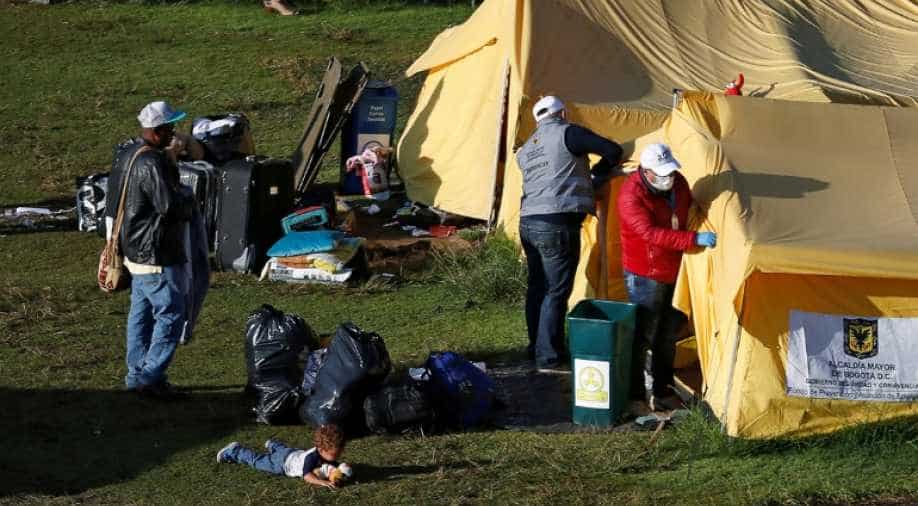 Mayoral workers dismantle tents inside a temporary humanitarian camp that is closed by the government, in Bogota, Colombia  Photograph:( Reuters )

The United Nations says some 3 million people have left Venezuela since 2015, seeking an escape from a hyperinflationary economic collapse that has put basic food and medicine beyond the reach of most citizens.

Colombian authorities evacuated a camp that housed Venezuelan immigrants in the capital of Bogota on Tuesday, dismantling a temporary shelter even as the flow of refugees from the crisis-stricken neighbouring nation is expected to continue unabated.

Yellow tents that once housed families were piled into a corner of the football pitch that in November was turned into a temporary shelter for some 600 Venezuelan migrants who had previously been sleeping outside the city`s main bus terminal.

Carmen Nunez, who turned 58 on Tuesday, cried in front of authorities because she had no idea where to go now.

"Should I go to the street?" she said, with her walking stick in hand. "I have no money, but I want to go back to Venezuela, at least there I will have a place to stay."

She was offered transportation to the city of Cucuta on the Venezuelan border but does not have money to return to her home on the Venezuelan coast. Other migrants stood outside the tightly policed camp entrance with their belongings.

From the outset, Jan. 15 had been set as the camp`s closure date, partly in response to pressure from Colombians over the growing presence of migrants.

The United Nations says some 3 million people have left Venezuela since 2015, seeking an escape from a hyperinflationary economic collapse that has put basic food and medicine beyond the reach of most citizens.

Another 2 million are likely to emigrate in 2019, it estimates. The vast majority travel by land to Colombia, some on foot, though many continue on to other parts of South America.

Cristina Velez, Bogota`s Secretary of Social Integration, said in a press conference that the city did not plan to open any more shelters unless there were extraordinary circumstances that warranted doing so.

"I have no idea what we`re going to do," said Junior Palacios, 23, from Caracas, who was sitting outside of the evacuated camp with four friends.

"I don`t want to go back (to Venezuela). It`s a question of moving forward and building a life here somehow."