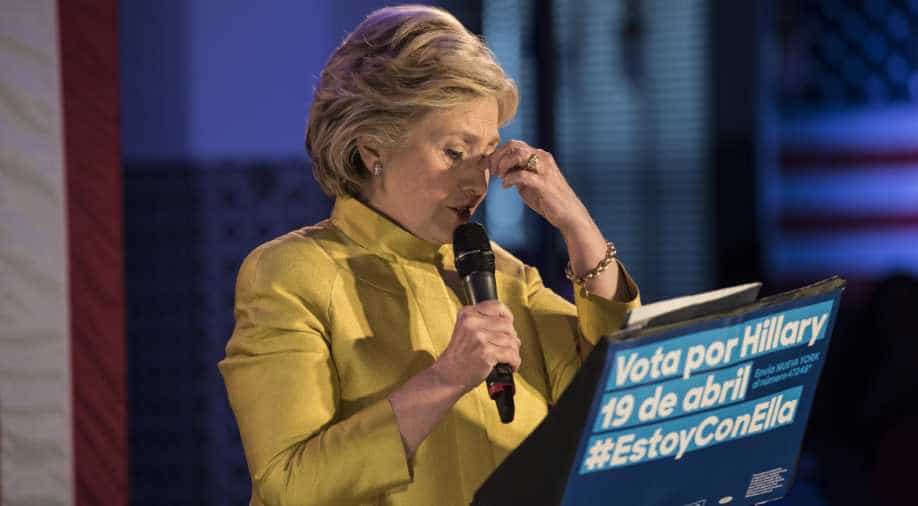 In Southwest Miami, a district heavily populated with Latinos from several central and South American countries, Hillary Clinton supporters gathered for a pep talk before hitting the streets to canvass for votes in what every single one of them consider the most important presidential election ever.

Volunteers across Florida made a last-minute push to get voters to the polls ahead of Election Day on Tuesday, pitting Republican

The get-out-the-vote organizer tells the volunteers what's at stake.

"It's arguably the most important county in this election. We need Miami-Dade to vote for Hillary Clinton," he said. Across town in the the outskirts of Wynwood, Miami's art district, a massive mural depicts Donald Trump as a pig with a message reading, "When pigs fly."

Latino voters could have an outsized influence in Tuesday's election. Early voting data shows a jump in the number of Hispanic voters this year, especially in the key swing states of Nevada and Florida -- and Clinton would likely be the biggest beneficiary.

"We are seeing that in the numbers. We are seeing that particularly here with expanded voter registration here in Florida. We are also seeing it with early turnout to the polls. They are breaking records, not only here in Miami and Florida breaking records for early voter turnout but hispanic and latino turnout is coming in," said Elbert Garcia, the director of "Florida`s Voice", an immigration advocacy organisation.

In Florida, the Clinton campaign estimates early Latino voting is up 139 per cent, or more than twice as much, compared to 2012, according to a field report dated Wednesday.

Despite the surge in early voting, there is no certainty about which candidate people chose for president. There is also no guarantee that the higher Latino turnout rate will continue on Election Day and that they and other minority voters will make enough of a difference to swing Florida and other states.

But even within the minority, there is could be a divide in South Florida where Cuban-Americans, who historically side with Republican candidates, could side with Trump.

In Miami's Little Havana, dueling Clinton and Trump rallies took place Monday in front of a cafe, with supporters of both sides waving signs at on-coming traffic and arguing with each other.

"They (Latinos) are letting themselves be heard with the vote for the first time," said Ania Fresna, a Clinton supporter that says Cubans will side with Clinton.

"We will be winners tomorrow. We will drink champagne, we will eat papa frita (French Fries) and pollo (chicken) for Hillary," added Clinton supporter Carman Santos.

But Trump supporters are convinced that Cubans will continue to side with the more conservative Trump.

"I am as a woman Latina, and I don't think he (Donald Trump) has anything against Latinos. I think that he has a very good point of view which is the United States needs a boundary. It's time that everyone comes in the right way," said Linnette Lemar.

Polls show Clinton and Trump in a virtual dead heat in Florida.