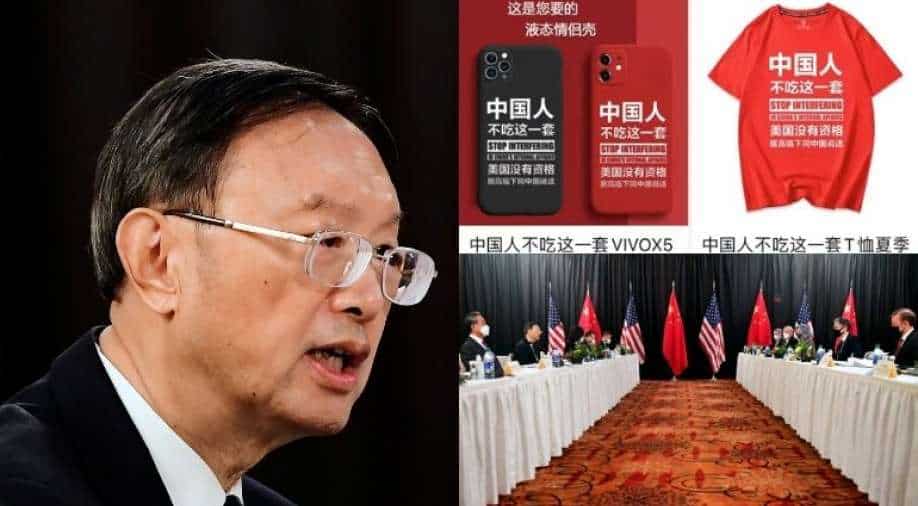 According to data on Taobao.com, hundreds of people have bought t-shirts printed with Yang's messages for Blinken at prices ranging from 30 yuan ($4.61) to 60 yuan

Chinese e-commerce platforms are selling t-shirts, umbrellas, handbags, lighters and mobile phone cases bearing phrases used by the country's top diplomat during a testy exchange with US officials in Alaska.

Yang Jiechi blasted US foreign and trade policies, and democracy in the United State in a 15-minute riposte to pointed remarks by US Secretary of State Antony Blinken during their meeting on Thursday.

The phrases "Chinese people won't swallow this"， "US has no qualification to talk down to China", and "Stop interfering in China's internal affairs" have begun appearing on merchandise sold on Chinese platforms including Alibaba's, Taobao, JD.com and Pinduoduo.

"I love my country, so I must support patriotism," a t-shirt seller said on social media platform Weibo.

According to data on Taobao.com, hundreds of people have bought t-shirts printed with Yang's messages for Blinken at prices ranging from 30 yuan ($4.61) to 60 yuan.

Phone cases, with Yang's words, are sold at prices ranging from 12 yuan to 40 yuan on Taobao.

Most netizens on China's Twitter-like microblog Weibo said they are keen to buy, with one calling it a "real patriotic business".

Washington had described the talks as "tough and direct", while the Chinese delegation said they were timely and helpful.