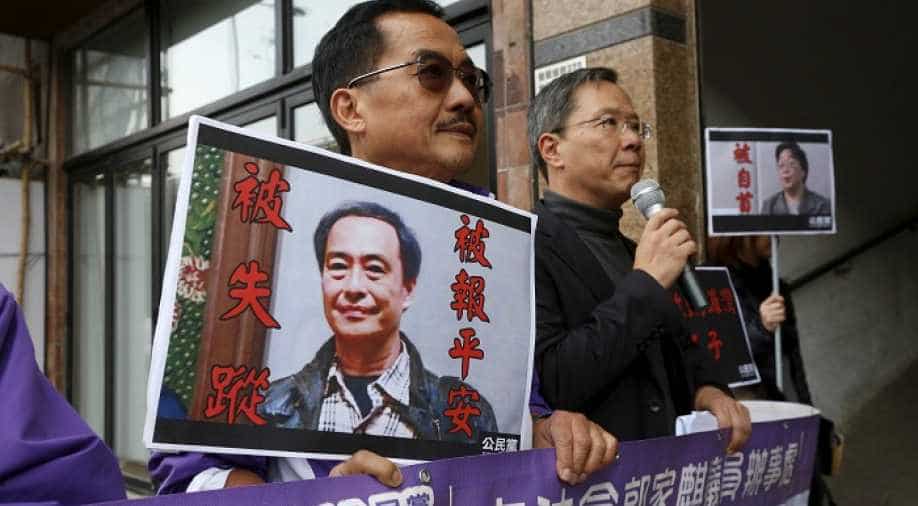 Members from the pro-democracy Civic Party carry a portrait of Lee Bo (L) and Gui Minhai before they protest outside Chinese Liaison Office in Hong Kong, China January 19, 2016. Photograph:( Reuters )

Gui, a bookseller previously based in Hong Kong who sold books critical of China's political leadership, was detained by mainland police in 2018, according to news agency Reuters.

A Chinese court on Monday sentenced Chinese-born Swedish citizen Gui Minhai to 10 years in jail for illegally providing intelligence overseas, the Ningbo Intermediate People's Court said in a statement on its website.

Gui, a bookseller previously based in Hong Kong who sold books critical of China's political leadership, was detained by mainland police in 2018, according to news agency Reuters.

He was snatched by Chinese authorities while on a train to Beijing in February 2018.

Gui's detention strained relations between Sweden and China in the months leading up to Monday's sentencing, with Chinese officials warning Swedish counterparts of meddling in Chinese internal affairs.

Swedish foreign ministry officials, who had demanded his release, have yet to comment.

The Ningbo court statement said Gui, 55, had stated that he would not appeal the sentence and had asked to have his Chinese citizenship reinstated.

Gui is the highest-profile of five booksellers who disappeared between October and December 2015, all linked to a Hong Kong bookshop famous for its gossipy texts on Chinese political leaders.

Gui was initially abducted in the Thai beach resort of Pattaya before surfacing, like the others, in detention in mainland China. Three of his colleagues were detained in mainland China while another was widely thought to have been abducted in Hong Kong and spirited across the border.