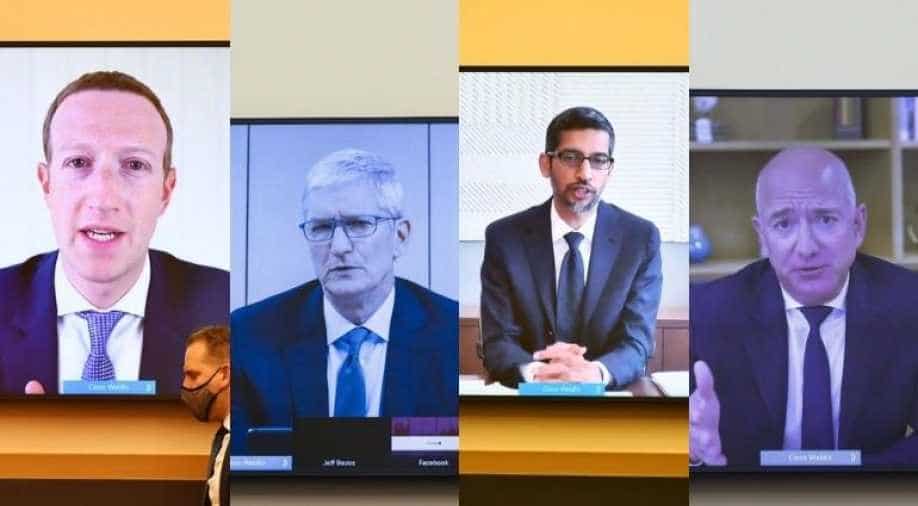 The lawmakers made it clear they shall not bow in front of the "emperors" of the online economy.

They were called "monarchs" by the angry and determined US congressional committee. The lawmakers made it clear they shall not bow in front of the "emperors" of the online economy. The grilling went on for more than five hours. It began with the big four being slammed for using their power to crush rivals.

"Many of the practices used by these companies have harmful economic effects. they discourage entrepreneurship, destroy jobs, hike costs and degrade quality. Simply put, they have too much power," the committee chairman's said.

Too big, too powerful - that's was the main accusation. The four companies are valued at $5 trillion which is more than the GDP of Germany.

All the CEOs unanimously said they are not as big as the lawmakers think. They had one argument to make: breaking up US companies would help China. They emphasised that their companies are from America, for America but failed to explain their business practices.

"I disagree with that characterization," Sundar Pichai said. The lawmaker hit back with evidence allegedly Google stole reviews from crowd-sourced review app Yelp and threatened to delist the company, if it objected.

Next, the committee accused Facebook of using threats to acquire Instagram. "Has Facebook ever threatened to clone the products of another company while also attempting to acquire that company?" the lawmaker asked.

"Congresswoman, not that I would not that I recall," Facebook founder Zuckerberg said. Once again the committee hit back with evidence with internal emails in which Zuckerberg himself had threatened Instagram co-founder Kevin Systrom.

Jeff Bezos, the owner of Amazon, the biggest tech company in the world, was delayed due to tech issues. He was accused of breaching data privacy laws.

"Does Amazon ever access and use third-party seller data when making business decisions? and just yes or no will suffice sir," the lawmaker asserted.

"I can't answer that question yes or no," Bezos said.

Then came the role of China, the committee demanded clarification. The question was asked if Apple was still manufacturing its iPhones in China? and why was Amazon featuring 80 companies to source from China and use bonded Uighur labour?

Amazon CEO Bezos did not say much, but, Apple CEO Tim Cook had an answer.

"Forced labour is abhorrent, and we would not tolerate it in Apple, and so I would love to get with your office and engage in the legislation." The lawmakers asked more about China.

While the others evaded the question, Zuckerberg said: "Congressman, I think it's well documented that the Chinese government steals technology from American companies."

A hearing such as this has not been seen in a long time, not since Microsoft stood trial in the 1990s and not since the 1994 Congressional hearing of top American tobacco executives including the AT&T antitrust trial in the 1980s.