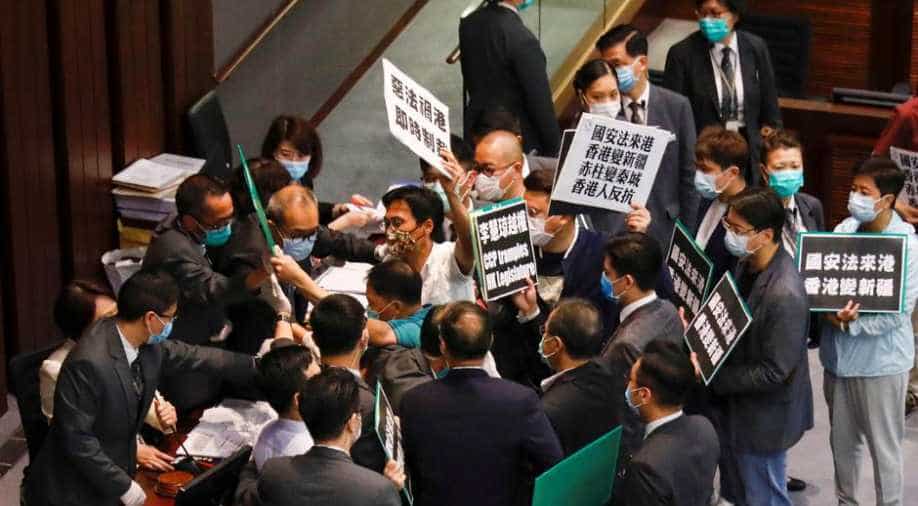 A draft bill on establishing the legal system and enforcement mechanisms for the HK Special Administrative Region to safeguard national security was tabled in China's National People's Congress (NPC).

China's proposed new security law to firm up its control over Hong Kong could run into problems in courts, the city's Bar Association has warned, stressing that Beijing has no legal authority to enact its national security law for the former British colony.

In a strongly-worded statement, the Hong Kong Bar Association also expressed concern over suggestions that mainland security agencies would be set up to safeguard national security within the city, saying it was "entirely unclear" how that arrangement would comply with Article 22 of the Basic Law, which stipulates that Beijing departments not to interfere in local affairs.

A draft bill on establishing and improving the legal system and enforcement mechanisms for the Hong Kong Special Administrative Region (HKSAR) to safeguard national security was tabled in China's National People's Congress (NPC) on Friday.

It is expected to be passed on May 28.

The bill is regarded as a political bombshell for the former British colony as China has decided to bypass local Legislative Council to bring about a new national security law tailor-made to take control of Hong Kong which has been witnessing mass protests by pro-democracy groups since last year demanding autonomy and freedom from Beijing.

Thousands of people took part in mass protests in Hong Kong on Sunday. Police fired tear gas and water cannons at the protesters.

The Hong Kong police is gearing up for another mass protests on Wednesday outside the local legislature.

"It is entirely unclear how the proposed agencies set up in the Hong Kong Special Administrative Region (HKSAR) will operate under the laws of the HKSAR, whether they will be bound by the laws of the HKSAR, whether they have the power of enforcement, and whether such powers as exercised will be limited by the laws currently in force in the HKSAR," Hong Kong-based South China Morning Post quoted the Bar Association statement as saying.

The Bar Association also pointed out that there was no assurance that the proposed legislation "given its status as a national law" would comply with provisions of the International Covenant on Civil and Political Rights to which Hong Kong is a signatory, or that there would be a public consultation before promulgation.

The absence of public consultation would stand in sharp contrast to the city's attempt to legislate a national security law on its own in 2003, where an extensive consultation process was undertaken.

The bill was ultimately withdrawn after 500,000 people took to the streets to oppose it.

"This is unprecedented. The public must be allowed the opportunity to properly consider and debate about proposed laws which affect their rights and obligations," the statement read.

It also questioned a line in Beijing's Friday resolution that named the judiciary alongside the administration and legislature as Hong Kong organs required to prevent, stop and punish acts endangering national security, arguing it had given rise to perceptions the courts were "being or will be instructed to act in a particular way."

On Monday, Xie Feng, commissioner of China's Ministry of Foreign Affairs in Hong Kong, attempted to lay some of those fears to rest, the Post report said.

Speaking at a briefing, he underscored the judiciary's independence, saying the new law would not "change the legal system in Hong Kong SAR, or affect the independent judicial power, including the right of final adjudication exercised by the judiciary in Hong Kong."

The proposed national security law was unveiled after almost a year of increasingly violent social unrest in Hong Kong, which was sparked by a now-withdrawn extradition bill and later evolved into a wider anti-government movement.

Meanwhile, China's Vice-Premier Han Zheng said the country's determination to implement a new national security law for Hong Kong must not be underestimated, as the decision was reached after careful consideration of the interests of the country and city.

"Don't underestimate Beijing's determination. When the decision is made, we will implement it till the end," Han, China's state leader who oversees Hong Kong and Macau affairs told local deputies to China's legislature on Sunday, the Post report said.

A legislator Wong Yuk-shan said, "Han stressed that the move was made after careful deliberation, taking into account the long-term interests of Hong Kong, and more importantly, of the state and the nation." State broadcaster CCTV reported Han as saying the law would target only a small fraction of people who advocated Hong Kong's independence and the "dark forces" behind them.

The term is used by Beijing to refer to supposed overseas support for the anti-government movement.

Han said only three groups would be affected - pro-independence activists, violent radicals and protesters seeking to derail the city's economy with a mentality of "if we burn, you burn with us".