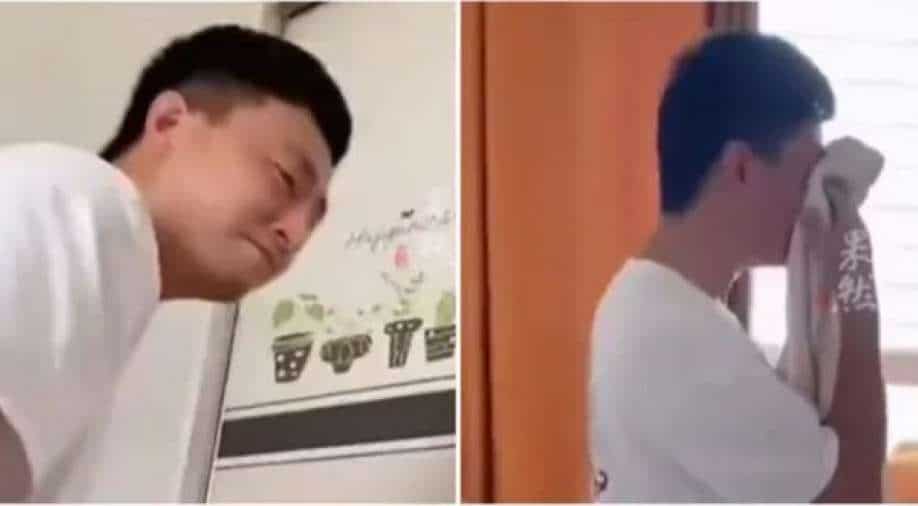 The father broke down in tears on June 23 as he felt let down when he received his son’s final exam report card. Photograph:( Twitter )

Weibo users saw the video and expressed sympathy for the father's parenting challenges. Others countered that the child's performance was a result of the father's ineffective math instruction.

After his son received six out of a possible one hundred on a math exam, a Chinese father who supposedly trained his son every day for a year went viral for sobbing.On June 23, the child's test results were delivered to his Zhengzhou, Henan Province, parents. In a video uploaded on Weibo by Qilu Evening News, the father sobs after learning that their son scored only six points on his final arithmetic test.

"I don’t care anymore, my efforts are wasted, let him struggle by himself!" the father reportedly said.

His wife can be heard giggling in the background while he can be seen sobbing and wiping his eyes in a bedroom.

For the previous year, the dad allegedly tutored his child till midnight each day. His son's erratic test results are another factor contributing to his disappointment. According to his mother, the child's grades on prior exams ranged from 40–50 points to 80–90 points.

Weibo users saw the video and expressed sympathy for the father's parenting challenges. Others countered that the child's performance was a result of the father's ineffective math instruction. The capacity of the father's son to pay attention in class may have been impacted by his late-night coaching, according to some viewers.

People's reactions to this were conflicted. While some condemned the father, others sympathised with the young child.

The general consensus, even by failing standards, was that six out of 100 marks was a little excessive and certainly too little. Others claimed that the father's numerical prowess, not the son's, was reflected in the son's six out of 100 score. Less jocular commenters said that the boy may have submitted the exam with blank answers as a sort of silent protest and that the father should reconsider if his approach to teaching his son was effective.