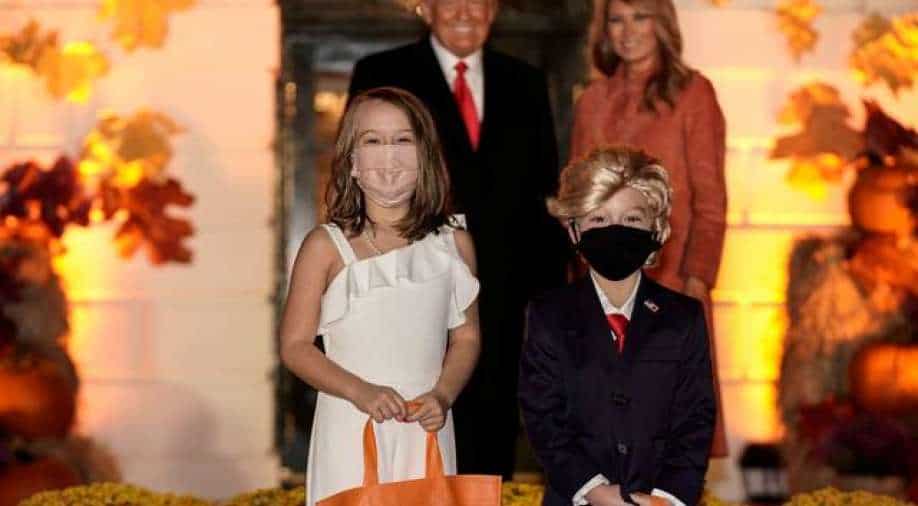 This year's event took place with extra precautions due to the coronavirus, according to the White House, including a limited guest capacity, required mask-wearing, and social distancing.

Two children dressed up as US President Donald Trump and his wife Melania at a Halloween event at the White House on Sunday.

They thoroughly enjoyed their mini lookalikes -- as far as the smiles on the faces of the president and first lady go, and posed for a photo with the pair.

The boy's costume included a blonde wig, a black suit, and a red tie, while the little girl wore a white gown.

This year's event took place with extra precautions due to the coronavirus, according to the White House, including a limited guest capacity, required mask-wearing, and social distancing.

A few hours prior to his Halloween bash, Trump was signing pumpkins at an orchard in the state of Maine.

"It'll be on ebay tonight," Trump joked as he autographed them.

Meanwhile, in New York city, a different kind of Halloween was seen altogether -- one that has gripped the whole of United States this entire summer.

There were protests and violence on the streets of New York -- a skirmish broke out between supporters and opponents of Donald Trump on Sunday afternoon.

It began as a virbal dispute, and soon turned physical. There were punches thrown -- eggs were hurled and expletives were yelled.

All of this happened in the heart of Times Square.

Clashes also happened a few miles away in Brooklyn.

But despite all this, many people voted -- hoping to ensure that the US is united once again.