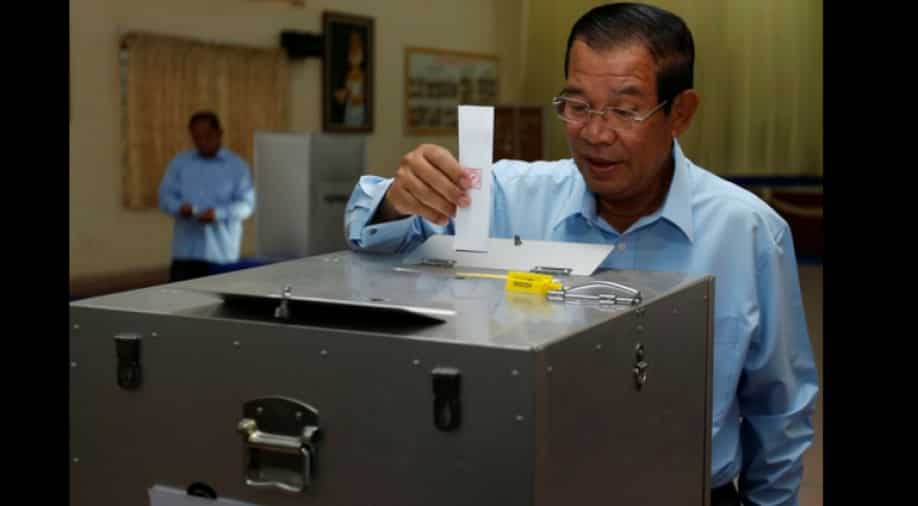 File photo of Cambodia's Prime Minister and President of the Cambodian People's Party (CPP), Hun Sen drops a ballot into a box during a senate election. Photograph:( Reuters )

Voting got under way in Cambodia on Sunday in a Senate election that the ruling party of Prime Minister Hun Sen was expected to sweep following a crackdown on opposition.

The vote, to elect 58 members of the 62-strong Senate, will see 123 members of parliament and thousands of commune councillors vote across Cambodia. The country's king and National Assembly each appoint a further two Senate members.

Rights groups and members of the opposing Cambodia National Rescue Party (CNRP) have called the vote a "sham" and "undemocratic" after almost half of the councillors were stripped of their right to vote after the CNRP was dissolved by a court last November at the government's request.

"This election is different from before because there is no opposition party," said Thav Bunthy, 58, a commune councilor from Hun Sen's ruling Cambodian People's Party (CPP). "It's not just good for my party but also for the country," he said, speaking outside a polling station in Phnom Penh.

The dissolution of the CNRP was followed by the arrest of its leader, Kem Sokha, last year for allegedly plotting to overthrow the government with U.S. help, an accusation both the United States and Kem Sokha have rejected.

The CNRP condemned the vote on Sunday, saying its 5,062 commune councillors and lawmakers had been stripped of their voting rights.

"The Cambodia National Rescue Party (CNRP) calls on all friendly countries of Cambodia and the United Nations to not accept the results of the Senate election," the CNRP said in a statement.

Advocacy group ASEAN Parliamentarians for Human Rights APHR said the vote cannot be considered "a legitimate democratic exercise", after the dissolution of CNRP and the overall climate of repression over the past year.