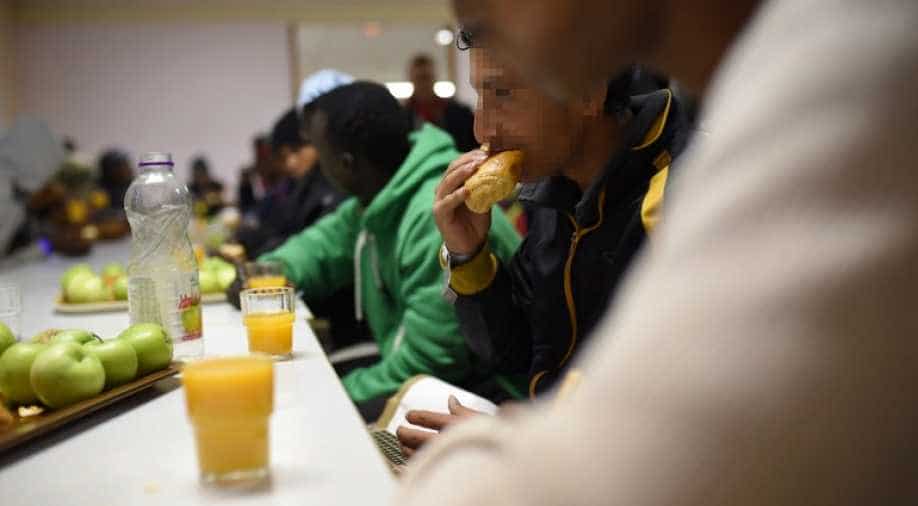 Over 1,600 unaccompanied minors left in Calais in buses after the demolition of the migrant camp. In photo: Unaccompanied migrant minors eat and drink upon their arrival to a reception centre on November 2, 2016. Photograph:( AFP )

More than 1,600 unaccompanied minors left the Calais migrant camp for shelters across France on Wednesday, two days after the last shelters in the camp were demolished.

Buses took 1,616 children, mostly teenagers, away from the container housing where they were accommodated for the past week.

Forty-three minors were taken to the town of Carcassonne, around a thousand kilometres from Calais, in the first bus. Another was bound for Sainte-Marie-la-Mer, near the Spanish border, news agency AFP reported.

More than 5,000 migrants were transferred last week before bulldozers razed the makeshift shelters nicknamed the "Jungle" by its inhabitants.

The 'jungle' migrant camp had long served as a post for migrants to sneak into Britain, on trucks or trains crossing the Channel.

Many still dream of a life in England.

"I can't say I'm really happy because I don't know where I'll end up," said Ahmed, a 17-year-old from Sudan, before boarding a bus, reported AFP. "But I'm glad to be leaving the Jungle anyway."

Around 300 children have been taken in by Britain since mid-October. France said that Britain will review applications from minors who wish to be transferred to the country. Two British officials accompanied each bus. Their presence demonstrated Britain's "commitment towards the minors", regional security chief Fabienne Buccio said.

Last week, a few hundred minors were moved into shelters, but France Terre d'Asile charity's chief said that around half of them ran away afterwards. "They want to return to Calais," Pierre Henry said.

Now, only around 400 women with young children are left at the site. They live in a centre run by charities.

France has urged Britain to take in the minors but Britain blames France for delays in transfers.

The UN Committee on the Rights of the Child on Wednesday accused both countries of passing the buck, AFP reported.

"Disagreements between the French and UK governments over who should take responsibility for the majority of these children have led to major violations of these children's rights," the committee said.