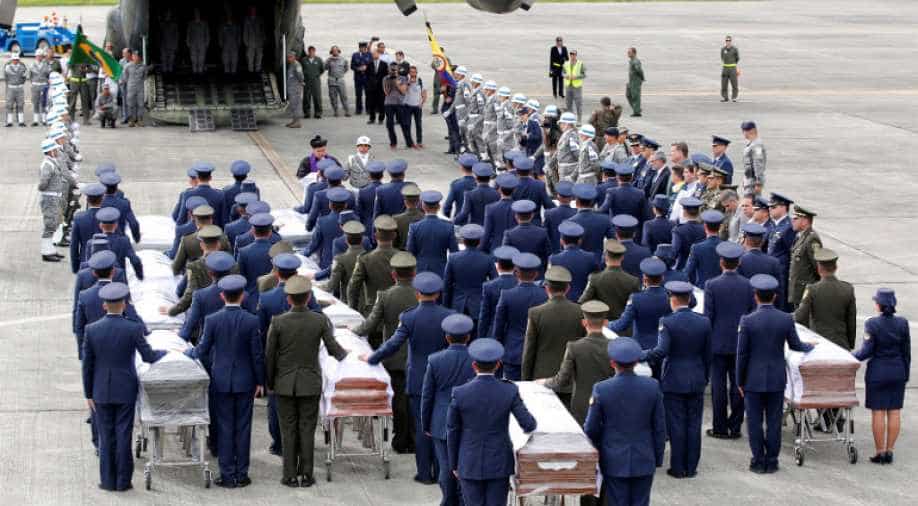 Reports in Brazilian media said that the plane, which circled outside Medellin for 16 minutes while another aircraft made an emergency landing, had barely enough fuel for the flight from Bolivia have outraged relatives of the victims. Photograph:( Reuters )

Brazil's President Michel Temer arrived in Chapeco early on Saturday (December 03) as the town, its buildings draped in the green colours of its devastated soccer club, prepared to receive the bodies of victims of an air disaster in Colombia that killed 71 and wiped out the team.

The crash on Monday night shocked soccer fans the world over and plunged Brazil, South America's biggest nation, into mourning. The BAe146 regional airliner operated by Bolivian charter company LAMIA had radioed that it was running out of fuel before smashing into a hillside outside the Colombian city of Medellin.

Only six people survived, including just three members of the soccer side Chapecoense, en route to the Copa Sudamericana final, the biggest game in its history.

Reports in Brazilian media said that the plane, which circled outside Medellin for 16 minutes while another aircraft made an emergency landing, had barely enough fuel for the flight from Bolivia.

At Chapecoense's stadium, where an impromptu shrine swelled with fresh flowers and handmade posters, hundreds of fans gathered for the mass memorial.

Some 100,000 fans, about half the city's population, were expected to attend, as was Gianni Infantino, president of world soccer governing body FIFA. Temporary structures in the stadium will shelter the coffins of players, staff and journalists during the wake.