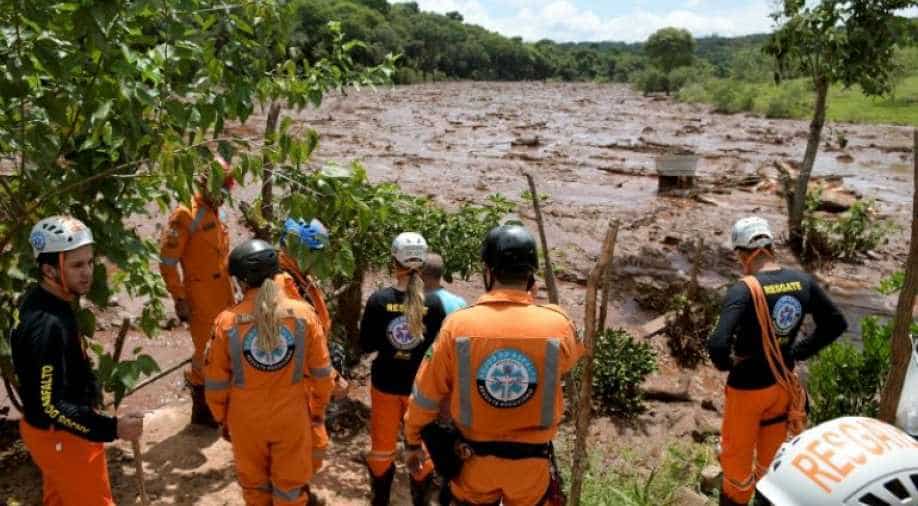 Brazilian firefighters said on Saturday that at least 34 people were killed, as rescuers continued to search for hundreds still missing.

President Jair Bolsonaro on Saturday flew over the disaster area after the death toll grew to 34 following a dam burst at an iron ore mine owned by Vale SA.

Brazilian firefighters said on Saturday that at least 34 people were killed, as rescuers continued to search for hundreds still missing.

The Minas Gerais state fire department also said 23 people have been hospitalized after the dam released a torrent of mud on Friday, leaving a roughly 150-meter-wide (500-foot-wide) wake of destruction.

In an earlier statement, the department had said 300 people were still missing and 46 had been found alive, a figure that it did not update in its latest disclosure.

Firefighters focused their hopes for finding survivors on a bus, a train, mining offices and nearby homes that were buried on Friday in mud after the dam break at Vale's Corrego do Feijao facility in Minas Gerais state.

Frantic family members of the missing crowded into a warehouse set up by Vale for those affected, next to a stretch of river now demolished by the sludge. More than a dozen helicopters helping to survey the area took off and landed from a soccer field nearby.

"The federal government should help us in the sense of bringing some technology from the outside to help us recover the bodies that are buried, because it is very difficult to locate a body five and 10 meters deep and Israel already offered to do that," Romeu Zema, governor of Minas Gerais, told local media.

A Brazilian judge in the state of Minas Gerais on Saturday froze 5 billion reais ($1.33 billion) in the accounts of miner Vale SA to pay for damages caused by a dam burst, prosecutors said.