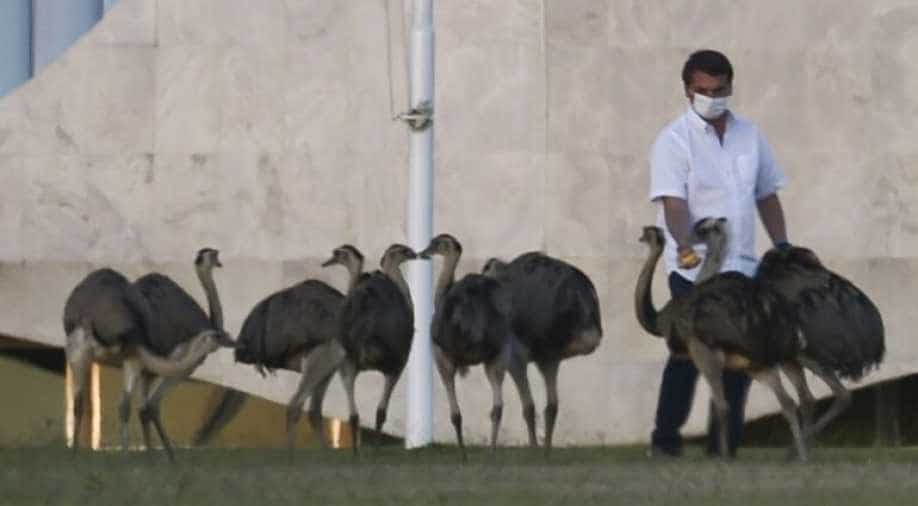 Bolsonaro  feeding birds at his official residence at the Alvorada Palace in Brasilia. Photograph:( AFP )

One of the birds that Bolsonaro was feeding 'pecked' him on his hand and this embarrassing moment was captured by a photographer.

Brazilian President Jair Bolsonaro has been bitten by an emu-like bird during his quarantine period which he ''cannot stand''.

One of the birds that Bolsonaro was feeding ''pecked'' him on his hand and this embarrassing moment was captured by a photographer. Several pictures of the entire incident were shared on social media platforms as well.

He was seen stepping out onto the grounds of Alvorada Palace and threw feed to the Greater Rhea birds that wander around the property. The birds are South America's large flightless bird.

Bolsonaro, who was tested positive for for coronavirus again on Wednesday, has been in quarantine nearly a week. He had announced Monday he planned to take another test as being in isolation is ''unbearable'' for him.

The far-right president, who has caused huge controversy in Brazil for repeatedly flouting lockdown measures in place to curb the spread of the virus, first tested positive a week ago.

Bolsonaro said he is not experiencing symptoms and that his use of the anti-malarial drug hydroxychloroquine, which he said he has been taking since he was diagnosed last week, is working.

The diagnosis looks to have done little to alter the 65-year-old former army captain's view of the illness, which he has dismissed in the past as just "a little flu". But since his quarantine in the Alvorada Palace, he has warned the elderly to protect themselves from the virus.

Bolsonaro's handling of the crisis has drawn criticism from public health experts as he fought state and city efforts to impose social distancing, arguing that the economic damage would be worse than the disease itself.

Brazil is the second worst-hit country in the world by the coronavirus after the United States, with more than 74,000 dead and 1.9 million cases.