Boris garden party: Who leaked the photo? Amid Omicron crisis, UK govt to hunt the 'insider' 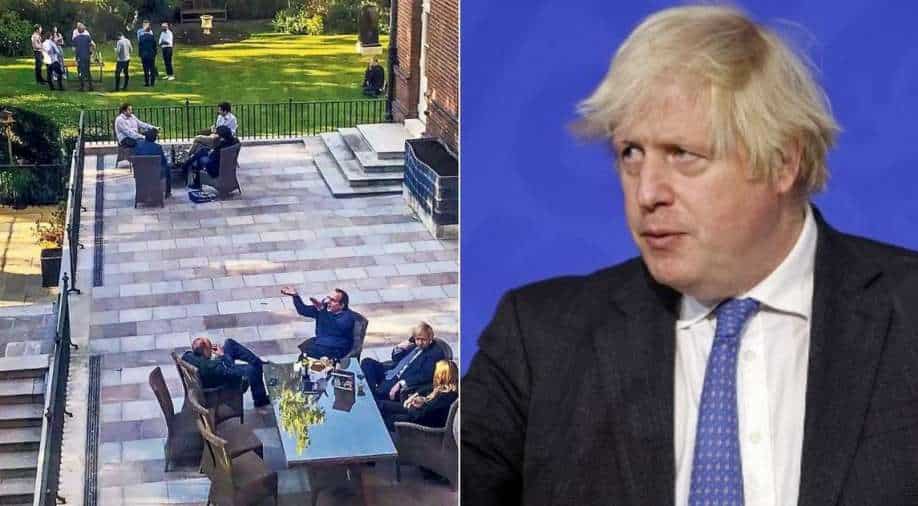 Deputy Prime Minister Dominic Raab said that whosoever made the photograph public wanted to 'damage the Government'. Photograph:( Others )

In the photo, Johnson can be seen sitting with his then-fiancee Carrie (now wife) and other staff members with bottles of wine and a cheeseboard

Amid an alarming rise in coronavirus (COVID-19) cases in the United Kingdom, Prime Minister Boris Johnson is facing a barrage of criticism over a Downing Street garden party, which apparently took place last year, on May 15.

The photo was published in almost all media outlets in the UK on Sunday as the garden party row went viral and angered the public, becoming fodder for online backlash. The photo showed Johnson's staff laughing and joking about in the gathering when such festivities were banned in the country.

In the photo, Johnson can be seen sitting with his then-fiancee Carrie (now wife) and 17 other staff members with bottles of wine and a cheeseboard on a table in front of them.

The photo didn't go well with the UK citizens, especially those who lost their loved ones during the pandemic, which is still causing havoc across the country with a record rise in the number of cases in the past week.

On one side, the ministers, who had been vouching for Covid measures during that time, urging citizens to follow social distancing and avoid public gatherings, are now being bashed. On the other side of this fiasco, there is a fuss about the 'insider' who leaked the photo.

Who leaked the photo?

The Daily Mail has reported that the photograph was believed to be taken from the first-floor veranda at the back of No 11 Downing Street. It is important to note that the offices of the Chancellor are there.

The office was apparently used by British Chancellor of the Exchequer Rishi Sunak's people, and anybody else going in would have been noticed, The Mail noted, citing a source.

If no one from outside came in, then it appears that someone who works at No. 10 might have clicked it or got access to it. Someone can be anyone, including the staff members.

Over rumours and speculations about who leaked the photo and which staff members were present on that day, Johnson's press secretary told the Guardian: "I'm not going to get into confirming individual staff members, as you'd expect."

As per Deputy Prime Minister Dominic Raab, whosoever made the photograph public wanted to "damage the Government".

Is there a conspiracy?

The timing of this party-photo-being-public is quite questionable as the Johnson administration has been facing criticism over a range of issues, including the Covid situation in the country.

There are talks about imposing fresh restrictions to curb the spread of the virus. Also, the Conservatives lost a long-held parliamentary seat in a by-election last week.

Is there a conspiracy to make the most of the situation in an attempt to jeopardise Johnson's political career?

Who said what to defend the government?

Johnson's spokesman on Friday, after sources told the Guardian and Independent about the event: "In the summer months Downing Street staff regularly use the garden for some meetings. On 15 May 2020 the prime minister held a series of meetings throughout the afternoon, including briefly with the then health and care secretary and his team in the garden following a press conference. The prime minister went to his residence shortly after 7pm. A small number of staff required to be in work remained in the Downing Street garden for part of the afternoon and evening."

After seeing the photo, he said, "As we said last week, work meetings often take place in the Downing Street garden in the summer months. On this occasion, there were staff meetings after a No 10 press conference. Downing Street is the prime minister's home as well as his workplace. The prime minister's wife lives in No 10 and therefore also legitimately uses the garden."

Raab on Monday said, "I think there’s a lot of exhausted people, and they, as people do in work, were having a drink after the formal business had been done."

Johnson’s spokesman on Monday said, "This shows colleagues who were required to be in work, meeting following a press conference to discuss work … It was not against the regulations for those individuals to have a drink outside working hours, but still discussing work."

Johnson on Monday said, "This is where I live, it is where I work. Those were meetings of people at work, talking about work."

Here's how the public reacted

On the left is leisurely garden party (I refuse to class this as working) with wine, attended by Boris & Carrie Johnson & breaking all 2020 #Covid Lockdown rules.

On the right is an NHS nurse after her 2020 shift coping with Covid patients, trying desperately to save lives. pic.twitter.com/9gT7Xe5wfZ

Hey, @metpoliceuk, here's the Prime Minister, his wife, and 17 other people at a garden party in Downing Street, held on 15th May 2020 - during lockdown.

Hope this counts as evidence. You're welcome 👍 pic.twitter.com/UamJp05u9Y

On Friday 15th May 2020 at 1 pm we held a minute’s silence on our ward (and throughout our hospital) in memory of those who died from Covid - little did we know that the PM & friends were enjoying a garden party that same afternoon. pic.twitter.com/ESx6AqZ3um

My Nan was home alone for months

While they, relaxed and had a garden party! https://t.co/JlAl4X8kYS

Let’s remember that at end April 2020 I was reprimanded by someone from THE POLICE because I stopped in a park, alone and not near other people, to LOOK at a swan, while on a walk to clear my head before work on ICU next day