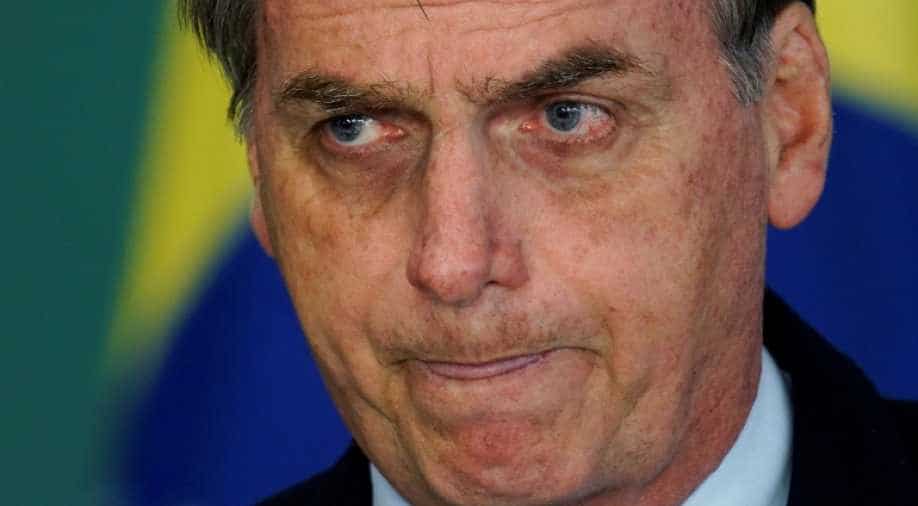 Jair Bolsonaro had been recovering at Sao Paulo's Hospital from an operation to remove a colostomy bag, which was inserted after he was stabbed in the abdomen in September.

Rightist Brazilian President Jair Bolsonaro was discharged here Wednesday from one of Latin America's premier hospitals after being hospitalized for 17 days following a colostomy reversal and receiving a level of treatment that is inaccessible to most of his countrymen.

The 63-year-old Bolsonaro had been recovering at Sao Paulo's Albert Einstein Israelite Hospital from an operation to remove a colostomy bag, which was inserted after he was stabbed in the abdomen in September during a campaign rally in the southeastern state of Minas Gerais.

Bolsonaro has undergone three successful surgeries since the near-fatal attack, including the January 27 colostomy reversal, but his latest hospital stay had to be lengthened because he was diagnosed last week with pneumonia and needed an increased dose of antibiotics.

On Wednesday, he said on Twitter while travelling by plane from Sao Paulo to Brasilia that the risk of death from September 6, 2018, stabbing can finally be definitively ruled out.

"I can only thank God and everyone that I'll finally be able to get back to work as normal," Bolsonaro added.

Shortly after the attack, which occurred just weeks before he was elected, the then-candidate underwent a surgical procedure (colostomy) in which one end of the colon (large intestine) is diverted through an incision in the abdominal wall.

This creates a stoma (opening in the skin) where a pouch for collecting faeces is attached.

In Bolsonaro's case, that procedure was necessary for the wake of the stabbing to avoid complications in the region where the initial emergency surgery was performed.

The colostomy reversal is a procedure that reverses the colostomy process and re-establishes the flow of waste through the gastrointestinal tract.

In comments last weekend on social media from his specially prepared hospital room at one of the region's most exclusive medical centres, Bolsonaro was the first to acknowledge his privileged situation.

"We know that few people could have treatment like this, but we're fully aware that our SUS (Brazil's publicly funded health-care system) can improve a great deal. We'll do everything possible to make that a reality," Bolsonaro said Sunday in a video uploaded to his Twitter account.

According to the medical institution, the Albert Einstein Israelite Hospital was born out of a "meeting of friends" in 1955 in which Dr Manoel Tabacow Hidal proposed that a hospital is founded as a gesture of thanks to Brazilians for welcoming Jewish immigrants after World War II.

Located in the upscale Morumbi neighbourhood on Sao Paulo's west side, the list of former patients also includes soccer legend Pepe and other prominent Brazilians.

The reality for these individuals is very different from that of many Brazilians forced to rely on an overcrowded and deficient public-health system. For those with only basic coverage, the wait for a colostomy reversal, for example, can be more than a year.

That has been the experience of 64-year-old Isaque Ferreira da Silva, who has been forced to wear a colostomy bag for 14 months.

He underwent emergency surgery at a public hospital in Sao Paulo in December 2017 after doctors detected a bowel perforation. A colostomy was performed and he still has the colostomy bag attached to his body.

"I have to do a test first and until I do that test I can't have the surgery" to reverse the colostomy, Ferreira da Silva, who still is able to work part-time as an electrician or a plumber, told EFE.

His problem - one that reflects the precarious state of Brazil's public health system - is that the machine needed for his pre-surgery colonoscopy was broken nearly all of last year.

"In a private hospital, those exams cost 870 reais (roughly $230). I don't have that kind of money, not to do that test," said Ferreira da Silva, who has not worked full-time for a year because the risk of possible damage to the colostomy bag prevents him from lifting anything heavy.

Sources with Brazil's public-health system confirmed to EFE that there can be a significant wait for a colostomy reversal because more urgent cases take priority.

It is recommended that surgery for the removal of the colostomy bag, which must be emptied daily and changed once a week on average, be performed three months after the colostomy if the patient is in optimal condition to undergo the procedure.

More than 30 years after SUS was created in 1988, the challenge of efficiently financing Brazil's public-health system - which 80 per cent of Brazil's 200 million people rely on exclusively for medical care - remains unmet.

Among the effects of a drop in spending in that sector, the number of hospital beds nationwide has declined by 34,000 over the past eight years, according to the Federal Council of Medicine (CFM), the agency tasked with professional regulation and medical licensing in Brazil.

As Ferreira da Silva sees it, all that's left for the poor is the worst of the worst.