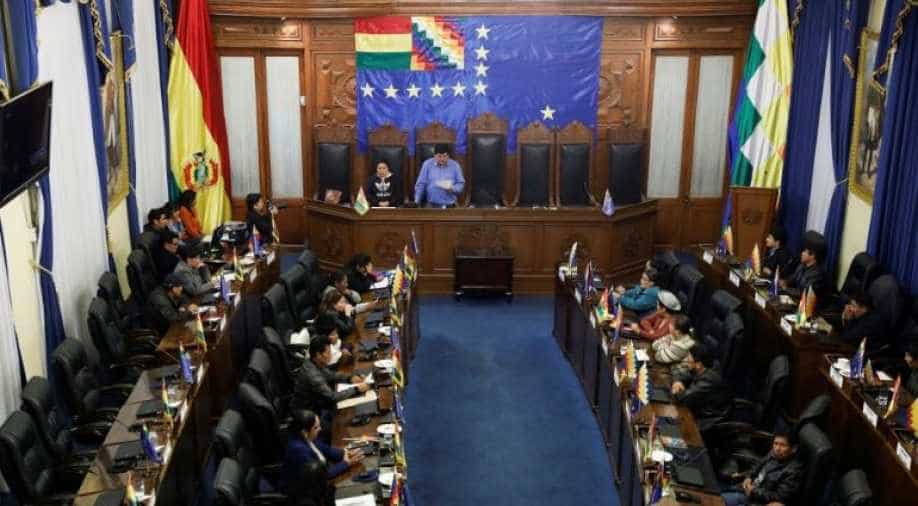 Bolivia's interim President Jeanine Anez, who took over on Tuesday after a spate of resignations, had earlier indicated she wanted to mend bridges with Morales' party

In a late-night session of the Bolivian Senate, the chamber's President, a member of Morales' Movement for Socialism (MAS) party, said there was an agreement to work towards new elections after weeks of protests and violence that led to leftist leader Morales resigning under pressure last Sunday.

"Today is a historic day where we have been able to agree between opposition and government with the sole objective to make new elections as soon as possible, to pacify our country and above all to defend democracy," said Mónica Eva Copa Murga, who had earlier been confirmed in her role.

She called on Bolivia's security forces, who have been facing skirmishes in the streets with pro-Morales supporters, to treat the country's indigenous groups with respect.

"Let's get rid of colours, of radical positions, what our country is looking for right now is peace," she said.

Bolivia's interim President Jeanine Anez, who took over on Tuesday after a spate of resignations, had earlier indicated she wanted to mend bridges with Morales' party. She said, however, that Morales himself would not be welcome as a candidate.

Anez, 52, is trying to lead a sharply divided Bolivia that has been rocked by protests since an October 20 election, which was won by Morales but marred by widespread allegations of fraud.

Veteran leftist and indigenous leader Morales resigned after an audit found electoral irregularities and the military withdrew its backing and urged him to step down as president to help restore calm.

Morales and his vice president Alvaro Garcia, who also resigned, have been offered asylum by Mexico.

"Evo Morales does not qualify to run for a fourth term," conservative former senator Anez told a news conference on Thursday, adding the country's "convulsions" were because he had run in defiance of term limits.

She said MAS, which has a majority in Congress, was welcome to participate in the vote. "They should start searching for a candidate," she said.

Morales, the charismatic leader of Bolivia since 2006, ran again despite a 2016 referendum against lifting term limits, after a court packed with loyalists gave him a green light to run indefinitely, citing his "human rights."

Jerjes Justiniano, one of Anez's newly appointed ministers, earlier told reporters that the interim government was pursuing talks with MAS.

"We are at the dialogue table, we are talking," he said in comments aired on channel Unitel, adding that MAS had sought assurance that Morales would be able to return freely to Bolivia, which he said would not be an issue.

"There's no problem with that, it's just one citizen more."

Anez did not give a specific date for the election, but under the constitution, she has 90 days to do so since declaring herself interim leader by invoking the constitutional line of succession earlier this week.

Morales has said he was the victim of a coup, with his supporters continuing to agitate on his behalf with marches and skirmishes in the streets of La Paz and nearby El Alto. On Thursday thousands of Morales supporters marched carrying colourful flags and banners in La Paz.

Meanwhile, Anez is shoring up her position. She has appointed a new military chief and cabinet members, while MAS lawmakers seemed to have backed away from plans to try to nullify her interim appointment.

Russia, an ally for Bolivia under Morales, said it would work with Anez and recognise her as Bolivia's leader until new elections were held.

The United States, Brazil, Colombia, Britain and Germany have also recognised Anez. Other governments in South America, including neighbouring Peru and Argentina, have so far held off.

In protests since the October vote, at least 10 people have been killed, the public prosecutor's office said, mostly by projectiles from firearms.

Morales, tweeting from Mexico, has called for dialogue to help "pacify" Bolivia, asking the United Nations and the Roman Catholic Church to help find a solution. The United Nations is sending an envoy.