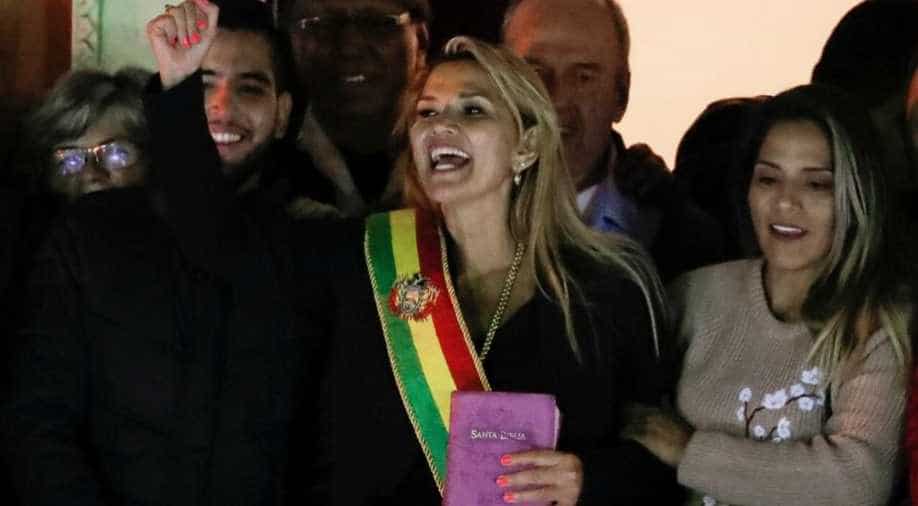 Bolivian Senator Jeanine Anez gestures after she declared herself as Interim President of Bolivia, at the balcony of the Presidential Palace, in La Paz, Bolivia. Photograph:( Reuters )

Senate vice-president and conservative Jeanine Anez, 52, assumed the interim role on Tuesday with a Bible in her hand after Morales took refuge in Mexico following the end of his 14-year socialist rule of the poor Andean nation.

Bolivia's new interim president pledged on Wednesday to hold a new election as soon as possible and condemned "revenge" acts by disgruntled supporters of fallen leader Evo Morales who resigned after protests over a disputed vote.

Senate vice-president and conservative Jeanine Anez, 52, assumed the interim role on Tuesday with a Bible in her hand after Morales took refuge in Mexico following the end of his 14-year socialist rule of the poor Andean nation.

"God bless you and allow us to be free and to hold transparent elections soon," she tweeted on Wednesday in a message to the country's youth.

Her arrival at the presidential palace faces an immediate challenge from lawmakers loyal to Morales who hold a majority in parliament and have threatened to hold a rival session to nullify her appointment.

After weeks of violent protests over alleged election rigging and then Morales' resignation, the highland capital La Paz was calmer on Wednesday, though dozens of his supporters protested outside looking to block access to the palace.

In 48 hours of turmoil at the weekend, mutinous police climbed on stations and joined marches, allies deserted Morales, the Organization of American States (OAS) declared his re-election was manipulated, and the military urged him to quit.

From Mexico, Morales has stayed defiant, accusing opposition leaders of a coup. Supporters, including a teaching union, planned rallies for Morales, Bolivia's first indigenous president who was beloved by the poor when he took power in 2006.

Opponents say pressure had built to a point of no-return after increasing evidence of tampering with the October vote, and that Morales had gone against the will of the people by seeking a fourth term.

Bolivia's largest union threatened a widespread strike unless politicians could restore stability, while a coca farmers' union official and a lawmaker close to Morales called for protests until he returned to finish his mandate in January.

Anez met on Tuesday night with the police and military, urging them to ensure peace.

"What a shame revenge continues," she tweeted to one lawmaker who said his house had been attacked by supporters of Morales' Movement for Socialism (MAS).

She entered the older "Burned Palace" presidential building on Wednesday, which Morales had stopped using considering it a discredited symbol of past power.

Bolivia's crisis has divided international reaction, with left-wing allies echoing his allegations of a coup, and others cheering his resignation as good for democracy.

"We look to all political parties to support efforts to restore calm following recent violence and to organize fresh presidential elections in accordance with the constitution," the British Foreign Office said in a statement.