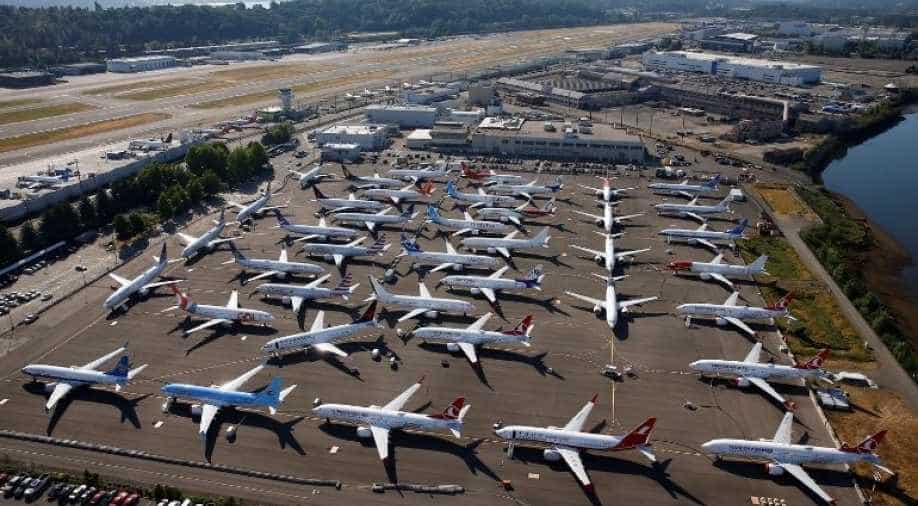 Grounded Boeing 737 MAX aircraft are seen parked in an aerial photo at Boeing Field in Seattle, Washington, US. Photograph:( Reuters )

The company previously argued pilots would need only computer-based training, so the announcement was the first major shift in approach since Boeing replaced its chief executive in late December.

Boeing on Tuesday endorsed simulator training for pilots of the 737 MAX prior to resuming flights, a change likely to further delay the aircraft's return to the skies.

The aviation giant, which has been roiled by a nine-month crisis after the plane was grounded following two deadly crashes, described the new stance as reflective of its "unstinting commitment" to safety.

The company previously argued pilots would need only computer-based training, so the announcement was the first major shift in approach since Boeing replaced its chief executive in late December.

But requiring pilots to train on simulators is expected to delay the resumption of commercial flights because of the limited number of MAX simulators available.

Focus now turns to the US Federal Aviation Administration, which previously resisted calls by Canadian and European regulators for the additional pilot training.

The MAX has been grounded since mid-March following the second of the two fatal crashes that together claimed 346 lives.

Boeing and the FAA have drawn intense criticism for their handling of the crisis as well as the process for certifying the plane to fly.

"Public, customer and stakeholder confidence in the 737 MAX is critically important to us and with that focus Boeing has decided to recommend MAX simulator training combined with computer-based training for all pilots prior to returning the MAX safely to service."

An FAA spokesman said the agency will consider Boeing's advice during an upcoming meeting involving a board of US and foreign air carrier crews that will help inform the agency's official recommendation before it is opened for public comment.

"The FAA is following a thorough process, not a set timeline, to ensure that any design modifications to the 737 MAX are integrated with appropriate training and procedures," the FAA spokesman said.

Michel Merluzeau, an aviation expert at Air Insight Research, said requiring simulator training would extend the delay before flights resume, but the step was essentially inevitable.

"It's a common-sense decision," Merluzeau told AFP. "It's something that shows that they are being very careful and not taking any shortcuts to speed the MAX's return to service."

US Representative Peter DeFazio, an Oregon Democrat who is leading a congressional probe of the MAX crashes, said simulator training was the right decision but "it's remarkable that it took two deadly crashes, numerous investigations and untold public pressure before Boeing arrived at this decision."

The debate over training requirements has loomed as an open question as Boeing worked on new software to address a problem with a flight handling system linked to both crashes.

The FAA also has raised additional concerns against a backdrop of intensifying public and congressional scrutiny.

Pilot Chesley "Sully" Sullenberger III, who famously landed a damaged plane on the Hudson River in New York in 2009, forcefully endorsed simulator training in a July congressional hearing, saying "reading about it on an iPad is not even close to sufficient."

A Boeing spokesman said Tuesday there are currently 34 MAX simulators around the world, 26 owned by airline operators and eight owned by Boeing.

That is a fraction of the 387 planes already delivered and roughly 400 additional planes that have been built and stored since the regulators worldwide grounded the MAX in March.

One option that has been discussed would be to conduct training through an updated simulator for Boeing's 737 NG, a predecessor to the MAX.

In December, Boeing ousted Dennis Muilenburg as chief executive and tapped long-time board member David Calhoun who takes over on January 13.