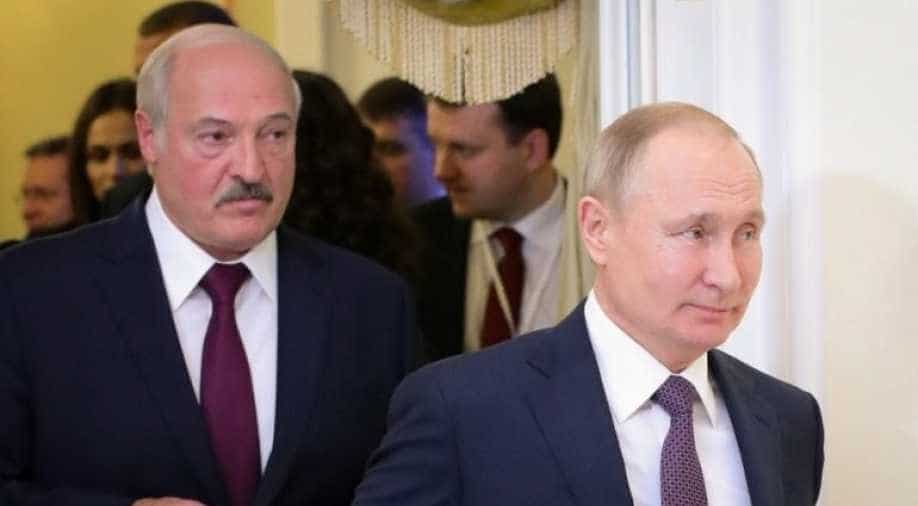 Belarus is a country of just 9.5 million people the size of Michigan, but for Putin, it is both a critical ally and an enormous headache.

He may be the Kremlin’s closest ally, but his loyalty remains in doubt.

When Alexander Lukashenko, the eccentric and brutal leader of Belarus, forced down a European passenger jet Sunday to arrest a dissident, he ushered in a new and even more brittle phase in one of the post-Soviet region’s most convoluted and consequential relationships: the one between Lukashenko and President Vladimir Putin of Russia.

The two are increasingly leaning on each other in the face of conflict with the West, but they have sharply diverging interests. Lukashenko, who has ruled for 26 years, relies on his iron grip on his country to assure his survival. Putin wants to expand Russian influence in Belarus, undermining Lukashenko’s authority in the process.

Now, with a summit meeting with President Joe Biden looming in June, Putin faces a choice over how much political capital to expend to continue supporting Lukashenko, whose commandeering of the Ryanair plane has complicated the Kremlin’s efforts to smooth relations with the West.

Russian officials and pro-Kremlin news outlets have taken Lukashenko’s side in the furor, but Lukashenko’s leading Belarusian opponents believe that the Kremlin’s support is only skin-deep.

“In the Russian Foreign Ministry, in the Kremlin, I think that people can’t stand Lukashenko,” Franak Viacorka, a senior adviser to exiled Belarusian opposition leader Svetlana Tikhanovskaya, said in a telephone interview. “But at the same time, since there’s not anyone more pro-Russian, they prefer to keep Lukashenko for now.”

Some Western politicians, such as Sen. Ben Sasse, R-Neb., have called for sanctions on Russia over the Ryanair incident. Lukashenko, the senator said Monday, “doesn’t use the bathroom without asking for Moscow’s permission.”

But the reality is more complicated, Lukashenko’s Belarusian opponents and critics say. In a flurry of diplomacy this week, Belarus’ opposition has been urging Western governments to stay focused on Minsk — not Moscow — in their response, insisting that Lukashenko should not be seen as Putin’s puppet.

“Lukashenko doesn’t listen to anyone,” Viacorka said, rejecting the idea that the ruler must have sought the Kremlin’s permission before forcing down the Ryanair plane. “He’s an absolutely unpredictable, rather impulsive person.”

Belarus is a country of just 9.5 million people the size of Michigan, but for Putin, it is both a critical ally and an enormous headache. In Putin’s worldview of a Russia threatened by an expanding and aggressive NATO, Belarus is the last remaining friendly buffer state between his country and the West.

Lukashenko, recognizing his special role, for years took advantage of it by playing Russia and the West off against each other — demanding cheap oil and gas from Russia even as he started building closer ties with the European Union and the United States.

Then came the uprising against Lukashenko last summer, when demonstrations that began over the ruler’s blatantly fraudulent claim of reelection swelled into the hundreds of thousands in anger over police violence against protesters. The Kremlin initially vacillated, then threw its support behind Lukashenko, even offering to send security forces.

Russian officials appeared to be similarly caught off guard by events Sunday, when Lukashenko scrambled a fighter jet and directed a Ryanair passenger plane flying between two EU capitals to land in Minsk because of a purported bomb threat.

Belarusian security forces then arrested a dissident journalist on board, Roman Protasevich — who had been on a Belarusian list of “terrorists” because he co-founded a social media outlet that galvanized and organized last year’s protests.

On Monday, the Kremlin’s spokesperson, Dmitri Peskov, told journalists in his regular daily briefing that he could not comment on the Ryanair incident. “It is up to the international authorities to assess the case,” he said.

It took another 24 hours for the Kremlin to formulate its final message; Belarus’ actions were “in line with international regulations,” Peskov said Tuesday.

By Wednesday, Lukashenko was appealing for Russia’s sympathy. Repeating his frequent descriptions of the domestic uprising against him as a Western plot, Lukashenko claimed that the real aim was to lay the groundwork for a revolution inside Russia. The result, he warned in a speech to Parliament, could be “a new world war.”

“We are a training ground for them, a venue for experiments before their push to the east,” Lukashenko said. “Having tested their methods over here, they will head over there.”

European airlines cancelled flights to Minsk this week, as directed by EU leaders who voiced outrage over what they called Lukashenko’s “hijacking.” But speaking in a marble-panelled hall of the Minsk House of Government, Lukashenko was defiant, claiming that a bomb threat against the plane had arrived from Switzerland.

“Don’t you cast blame on me!” Lukashenko thundered, jabbing his finger into the air. “I acted legally defending my people, and it will also be thus in the future.”

In Moscow, Lukashenko is widely seen as a frustrating and fickle partner. Despite his reliance on the Kremlin, for instance, he still has not recognized as valid the annexation of Crimea in 2014, which many Russians see as Putin’s crowning foreign policy achievement.

“It’s a pretty serious mistake to think that Moscow can snap its fingers to solve its problems in Minsk,” said Pavel Slunkin, a former Belarusian diplomat who resigned last year in protest against Lukashenko’s policies. “Lukashenko will try to avoid further dependence on Moscow in every possible way.”

After Russia propped up Lukashenko in his hour of need last summer, long-sought benefits were expected to accrue to the Kremlin. Lukashenko could have signed an agreement for a Russian military base in Belarus or allowed Russian investment into major Belarusian enterprises on favourable terms. But despite three face-to-face meetings between Lukashenko and Putin since last September — a fourth is expected in the coming days — none of that materialized.

“You’d think: The regime was saved, and he should have paid,” Kortunov said of Lukashenko. “But we’re not seeing that.”

Continuing to prop up Lukashenko could be costly for Putin, Kortunov warned.

As Putin prepares for a summit meeting with Biden scheduled to take place in Geneva on June 16, Russian officials have telegraphed that they want to lower tensions with the United States. One factor is domestic politics: Amid protests and discontent over economic stagnation, the Kremlin faces a public disapproving of foreign adventurism.

“The social contract of, ‘We won’t give you sausage, but we’ll make Russia a great power’ — this no longer works,” Kortunov said, describing Putin’s approach. “He understands that he needs to change the agenda. He won’t win any more with foreign policy.”

Lukashenko’s opponents are now pushing for the United States and Europe to enact more sanctions against Belarus that would further isolate him and perhaps provoke a split in the elite.

“When the Belarusian issue is discussed in the context of the Russian one, it becomes impossible to solve,” Viacorka said.