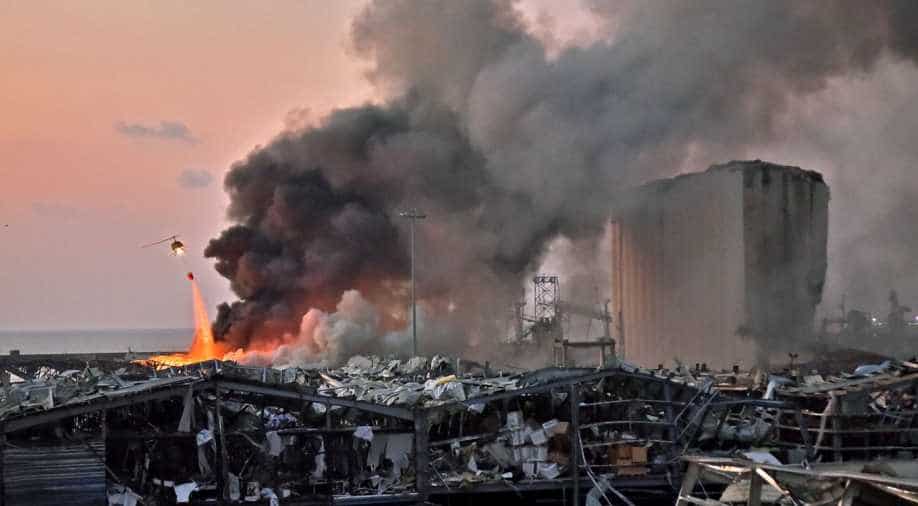 The new figure, up from 160, came exactly one week since the mega-blast ravaged swathes of the Lebanese capital, wounding more than 6,000 and temporarily displacing 300,000 people from their homes.

The death toll from Beirut's massive August 4 explosion has climbed to 171, a health ministry spokesman said.

The new figure, up from 160, came exactly one week since the mega-blast ravaged swathes of the Lebanese capital, wounding more than 6,000 and temporarily displacing 300,000 people from their homes.

It was caused by the ignition of 2,750 tons of ammonium nitrate that had been sitting at Beirut port for more than six years.

Also see: Beirut blast: Places where ammonium nitrate is being stored around the world

The explosion has fuelled popular outrage against the country's top political leaders and security agencies, and led to the resignation of the government on Monday.

Lebanon's president Michel Aoun, who accepted the resignation of Prime Minister Hassan Diab,  had previously said explosive material was stored unsafely for years at the port. He later said the investigation would consider whether the cause was external interference as well as negligence or an accident.

In the wake of the disaster, documents have come to light that show that top Lebanese officials knew about the existence of the stockpile in the heart of Beirut near residential areas, and did nothing about it.

It still wasn't clear what caused the fire in a port warehouse that triggered the explosion of the chemicals, which created a shockwave so powerful it was felt as far away as the island of Cyprus more than 200 kilometers across the Mediterranean.

The explosion, which obliterated the capital's port, damaged thousands of apartments and offices in the capital and came on top of an unprecedented economic and financial crisis the country the country has been mired in since late last year, compounding the nation's collective distress.

An international donor conference on Sunday (August 9) raised pledges worth nearly 253 million euros ($298 million) for immediate humanitarian relief, but foreign countries are demanding transparency over how the aid is used