Behind the Nashville bombing, a conspiracy theorist stewing about the government 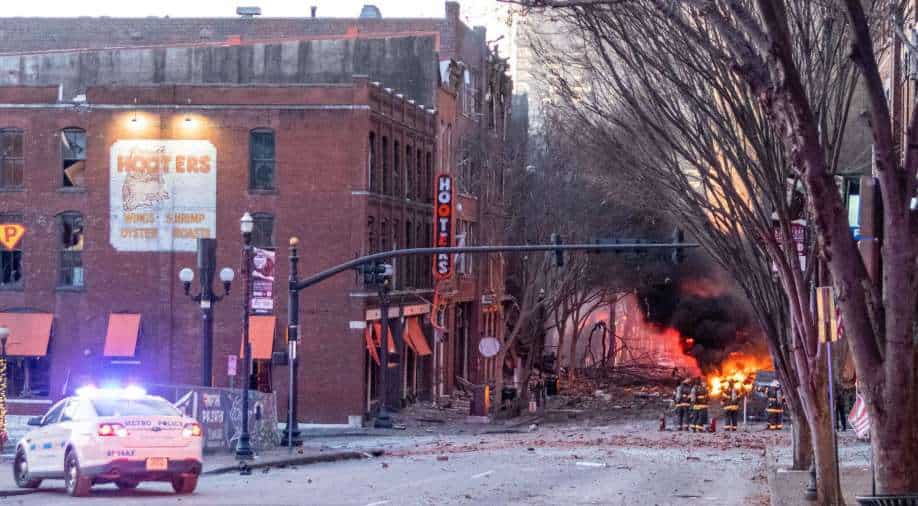 Warner, who was 63 when he died, was not among the angry QAnon followers who came to believe the unlikely theory that Donald Trump would hold onto power and defeat a satanic cabal. He was a computer specialist with a deep distrust of government, according to his own writings and to those who knew him. A loner, he had made at least one female friend feel manipulated and frightened. And he had cultivated a bizarre obsession with shape-shifting alien lizards and a dense thicket of other peculiar ideas.

NASHVILLE, Tenn. — Crystal Deck was opening presents on Christmas morning at her brother’s home when she heard the news that an enormous explosion had ripped through the historic heart of Nashville.

She knew instantly that the bomber was her dearest friend, Anthony Q. Warner, and quickly began fitting together clues that he had dropped, including a series of peculiar episodes she had dismissed as inconsequential, but which proved to be central to his suicidal plot.

Deck had, weeks earlier, found him fiddling with a prerecorded female voice on his laptop. And he had played her the 1964 Petula Clark hit “Downtown,” praising the song’s “significant spirit.” Both became eerie elements of the bombing.

Warner had even cautioned her that he was hatching something that would bring the police to her door, yet until that moment she had not understood the magnitude of his plan.

“I had just texted him ‘Merry Christmas!’” she said, crying at the memory.

Though Warner’s motive remains shrouded, false information and outlandish tales had poisoned his mind, apparently driving him to spectacular violence. This mindset has become alarmingly familiar to law enforcement officials now reckoning with the destructive force of conspiracy theories that mutate endlessly online and played a role in the Jan. 6 attack on the U.S. Capitol.

Warner, who was 63 when he died, was not among the angry QAnon followers who came to believe the unlikely theory that Donald Trump would hold onto power and defeat a satanic cabal. He was a computer specialist with a deep distrust of government, according to his own writings and to those who knew him. A loner, he had made at least one female friend feel manipulated and frightened. And he had cultivated a bizarre obsession with shape-shifting alien lizards and a dense thicket of other peculiar ideas.

As Warner’s best friend in his final months, Deck believes that some combination of a fatal cancer diagnosis salted with a belief in conspiracy theories led Warner to kill himself in such a brutally spectacular manner.

“He was trying to escape,” said Deck, who is not considered a suspect. “He talked about going out on his own terms.”

Warner, authorities said, drove his booby-trapped white recreational vehicle to Second Avenue North in the predawn hours. The detonation damaged some 50 buildings, collapsing a few and shearing the antique brick facades off others that will require years and tens of millions of dollars to restore. Two months later, the blast area remains a confused, desolate patchwork of boarded-up buildings, chain-link fencing and uneven reconstruction efforts.

The explosion, in front of an AT&T hub, crippled cellular, internet and cable service across several states for two days and underscored the vulnerability of such common yet unprotected facilities.

The FBI and other federal and local law enforcement agencies investigating the bombing have not made any findings public, although officials said they expect a report by early March.

Whatever else might have been on Warner’s mind in the period leading up to his death, he had been fixated for years on the notion that alien reptiles who inhabited underground tunnels controlled the earth, a fantasy spread by a notorious British serial conspiracy theorist. The giant lizards, Warner said, appeared among us as humans.

By the summer of 2019, he was making a friend, Pamela Perry, increasingly anxious, according to Raymond Throckmorton III, a Nashville lawyer who had represented both Perry and Warner on various matters.

“Pam Perry had had numerous contacts with me where she was just emotionally distraught and had been just really whipped into a frenzy of emotion by apparently crazy things or threatening or unusual things that Tony had said to her,” Throckmorton said. “I think he just sensed that she was at a weak point in her life and it was somebody he could dominate, manipulate or control.”

In August 2019, Perry told police that she believed Warner was building bombs in the RV parked outside his house on Bakertown Lane, and Throckmorton told the police that Warner that was capable of building explosives. Officers went to his home but neither the Nashville police nor the FBI pursued an investigation. A police and municipal review committee is now scrutinizing why.

Deck, 44, first met Warner several months later, when he came into the South Nashville Waffle House where she worked. “The first time I met him, I just thought his cornbread wasn’t really done in the middle and he was off a little bit,” she said.

She described two distinct sides to him.

There was the man who spent countless hours glued to his computer, steeping himself in eccentric plots.

But there was also the man who fixed the windshield wipers on her Nissan pickup, repaired her computer, paid the tab for dozens of other diners at the Waffle House and took her Yorkie, Bubba, for walks in the park.

But when Deck began frequenting Warner’s two-bedroom duplex in the Antioch area of Nashville, he told her that no one had visited for 20 years. His distrust of the government dated to roughly the same period, as he subscribed to the 9/11 conspiracy theory that it was an inside job rather than an al-Qaida terrorist attack.

It seemed to Deck he started on the path that led him to downtown Nashville at least 20 years ago. “He kept saying, ‘9/11 is what did it for me’,” she said.

Warner grew up in Nashville, attending local Catholic schools. He served two years in the Navy, in the mid-1970s. He never mentioned his family except for a dead brother, Deck said. His mother and sister declined to be interviewed.

Tom Lundborg, 57, who runs a Nashville-based electronic security firm, said he first met Warner years ago when Warner was working as a technician for the company, then run by Lundborg’s parents. Warner, in his 20s, owned a beautiful car and was dating his own cousin, Lundborg recalled.

“He was a really nice-looking guy back then,” Lundborg said. “He had long fluffy hair, a ‘Magnum, P.I.’-.type mustache. Girls liked him.”

Warner soon left to set up his own alarm business and took a client with him, Lundborg said, leaving his parents feeling exploited.

He tangled, too, with his own family, becoming embroiled in a court battle with his elderly mother in 2019, for example, after trying to give away his late brother’s house, where she lived.

In recent years he earned money through freelance IT work for local businesses, including answering service calls. “He was real proud of his computer skills,” Deck said. “He loved how smart he was.”

Warner also camped regularly in Montgomery Bell State Park, west of Nashville, a pastime that fed his conspiracy obsessions — he considered the park to be prime ground for hunting alien reptilians.

He described struggling to spot them with an infrared device, believing they could adjust their body temperature to the surrounding environment, and warned that bullets would just bounce off. “If you try to hunt one, you will find that you are the one being hunted,” he wrote.

Warner composed countless essays that he printed out or loaded onto flash drives, distributing them to Deck and other friends and acquaintances.

American conspiracy theories that attract a wide audience tend to be built around historic events like the assassination of President John F. Kennedy, while the notion of shape-shifting lizards remains obscure.

The idea gained adherents in the late 1990s after an infamous British conspiracy theorist, David Icke, wrote about it, accusing Queen Elizabeth II, the Bush dynasty and the Rothschilds of being reptilians. He organized seminars that ended with participants trying to dance away the “lizard power,” said Joseph Uscinski, a professor at the University of Miami and co-author of a book called “American Conspiracy Theories.”

Now, in retrospect, Deck dredges her memory for clues of what was to come.

By the time she met him, Warner was clearly preparing for a transition. He had largely emptied his house, save for an air mattress and a computer in the living room.

He hinted that he had been diagnosed with cancer, but she did not pry.

In early December, he sent a letter to his IT clients, telling them that he was retiring. He deeded his house to the daughter of a former girlfriend. Deck saw him last on Dec. 17, when he showed up at the Waffle House to give her his car, a white 2007 Pontiac Vibe, along with the jacket and gloves he used to wear when he walked her dog.

He implied that he had little time left.

On Christmas morning, surveillance camera footage released by the Nashville Metro Police showed that Warner drove his RV downtown at 1:22 a.m. He parked on a tree-lined street filled with Victorian-era red brick warehouses and some new buildings housing restaurants, condominiums and souvenir stores. It runs perpendicular to Broadway, known for its brightly lit honky-tonks and live music, the main draw for tourists.

Several residents, awakened around 4:30 a.m. by what sounded like loud, rapid bursts of gunfire, phoned the police. The officers who responded found no indication of shots fired, and Deck said that Warner used gunfire noises as a ring tone on his cellphone.

He apparently used the sound that morning to attract attention, because a computerized, female voice — the voice Deck had heard him manipulating weeks earlier — soon began emanating from the vehicle, saying, “Stay clear of this vehicle, evacuate now. Do not approach this vehicle!” The police evacuated as many residents as they could.

The voice, more insistent, announced that the vehicle would detonate. It began a 15-minute countdown, interspersed with continued warnings to evacuate as well as snippets from the song “Downtown.”

<em>“When you’re alone and life is making you lonely, you can always go downtown.”</em>

At 6:30 a.m., surveillance video showed, a giant fireball erupted around the RV and the resulting concussion rocked the neighborhood. Already largely deserted on a holiday morning amid a pandemic, its scattered residents managed to flee before the explosion.

Warner was the only person killed.