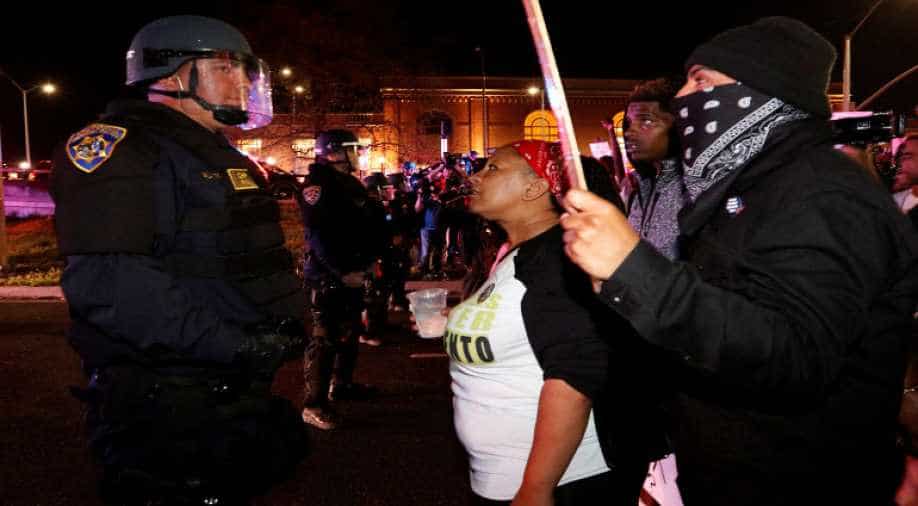 Demonstrators face off with California Highway Patrol officers as they protest the police shooting of Stephon Clark, in Sacramento, California, US, March 30, 2018. Photograph:( Reuters )

About 200 people demonstrated in Sacramento on Saturday to protest the fatal police shooting of Stephon Clark, in the latest of nearly two weeks of rallies since the unarmed black man was gunned down in his grandmother's yard.

Another vigil with about 150 people was held on Saturday night, and a protester was hit by a Sacramento sheriff's vehicle, according to a video posted on the internet and the Sacramento Bee newspaper.

The newspaper said the protester was taken to a hospital by the fire department and later released with bruises.

The sheriff's office said in a statement early on Sunday that protesters were yelling and kicking the patrol car. "The collision occurred while the patrol vehicle was travelling at slow speeds," it said.

The statement also said that the patrol car was damaged with dents and a shattered rear window from the protesters. The California Highway Patrol and the sheriff's office are investigating the incident.

Saturday's demonstration brought together a multi-racial crowd, many holding signs such as "Stop Police Rage" and "Power to the People". It was led by retired National Basketball Association player Matt Barnes, who grew up in the area and had two stints with the Sacramento Kings franchise.

The death of Clark, a 22-year-old father of two, was the latest in a string of killings of black men by police that have triggered street protests and fuelled a renewed national debate about bias in the U.S. criminal justice system.

"We're here today to raise awareness, to come together peacefully and to have some accountability for the officers, not only in Sacramento but across the country, who have been doing this," Barnes told the Sacramento Bee.

Some of Clark's relatives attended the gathering in a city plaza. It followed a more heated protest overnight, during which demonstrators yelled expletives at police clad in riot gear.

Clark was shot on the night of March 18 by police responding to a report that someone was breaking windows. Police said the officers feared he had a gun, but that he was later found to have been holding a cellphone.

Police have said he was moving towards officers in a menacing way. The shooting was captured on a body cam video released by police.

On Friday, an attorney for Clark's family released a private autopsy showing most of the eight bullets that hit Clark struck him in the back, contradicting the police version of events.

Clark was shot six times in the back, once in the side and once in the leg, said the attorney, Benjamin Crump.

"This independent autopsy affirms that Stephon was not a threat to police and was slain in another senseless police killing under increasingly questionable circumstances," Crump said.

The Sacramento Police Department said it would have no further comment until after the release of the findings of an official autopsy by the county coroner, and a review by state and local prosecutors.

In several days of sporadic protests, protesters have blocked traffic and twice delayed fans from reaching games played by the Kings at the Golden 1 Center.