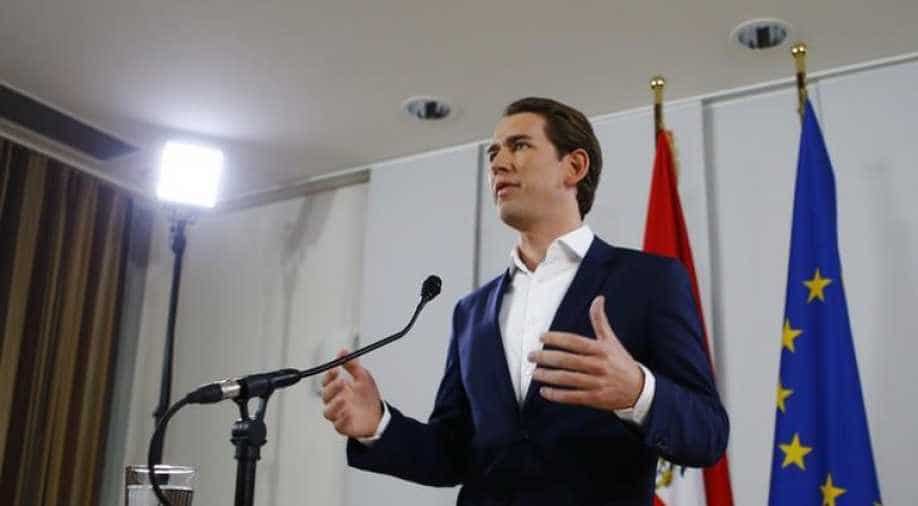 Kurz said his party's coalition with the centre-left could not continue. Photograph:( Reuters )

Setting up another nail-biting vote in Europe, that could see the populist far-right win power. Kurz said his party's coalition with the centre-left could not continue.

"The major decisions on the direction that this country takes must be taken by voters," Kurz told reporters in Vienna after being appointed head of his People's Party (OeVP).

He said that he would meet on Monday with Chancellor Christian Kern and the president to propose a joint parliamentary motion for elections to be held "after the summer".

Austria's unhappy "grand coalition" between Kern's centre-left Social Democrats (SPOe) and the centre-right OeVP is meant to govern until late 2018.

But after months of failing to agree much in the way of reforms to boost Austria's lagging economy, the head of the OeVP, Reinhold Mitterlehner, resigned last Wednesday.

Two days later Kurz, who is only 30 and who is seen as the rising star of Austrian politics, called for the coalition to pull the plug.

Earlier on Sunday Kern, 51, who has been chancellor for just a year, had said he was resigned to Austrians going to the polls in the autumn.

The OeVP "made it quite clear that they don't want (to be in coalition) any more," Kern said on public TV.

If the vote happens it will set up another tense election in Europe in 2017 following those in the Netherlands and France and the ones scheduled for Britain in June and Germany in September.

It could see Austria's far-right Freedom Party (FPOe), currently riding high in opinion polls, enter or even lead a new coalition with the SPOe or the OeVP.

Candidates from the SPOe and the OeVP, which have dominated Austrian politics for decades, failed to make it into the second round for the first time since 1945.

The FPOe's rise has mirrored that of other populist groupings in Europe on the back of concerns about immigration and terrorism and more established parties failing to connect with voters.

Emmanuel Macron's victory this month in the French presidential election came after he and Marine Le Pen of the far-right National Front knocked out centrist candidates in the first round.

But while the post of Austria's president is largely ceremonial, with the prospect of early elections the FPOe under leader Heinz-Christian Strache is scenting real power.

The FPOe's poll ratings have softened in recent months, in part due to the government, and in particular Kurz's OeVP, lurching more to the right with tough talk on immigration.

But the FPOe is still running neck-and-neck with the SPOe -- whose score has risen since Kern took over -- on around 30 percent each.

The OeVP is lagging behind in the low 20s. However surveys suggest that Kurz, who is highly popular, could revive his party's fortunes and even make it the most popular force.

The last time the FPOe entered government was in 2000 when it came joint second with the OeVP in elections under flamboyant former chief Joerg Haider, who died in 2008.

This prompted an outcry in Israel and Europe -- with even temporary EU sanctions -- that someone who could praise Hitler's "orderly" employment policies could enter government.

However the reaction is likely to be more muted this time because the party has toned down its rhetoric and because populists have gained ground Europe-wide.

So far neither of Austria's main parties has openly excluded the possibility of governing alongside the FPOe.