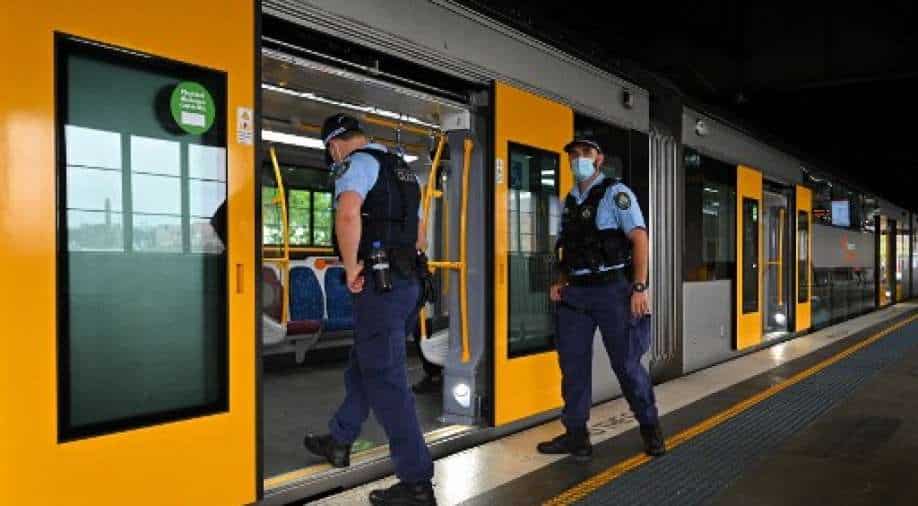 Police officers board a train in Sydney Photograph:( AFP )

Prime Minister Scott Morrison had said earlier the country has to "live with this virus" even as the country braces for Christmas celebrations.

Australia reported the highest number of coronavirus cases for the third consecutive day on Saturday.

Earlier this week, Sydney had recorded the highest number of coronavirus cases with 800 infections even as the government announced migrant skilled workers and foreign students will be allowed into the country.

Prime Minister Scott Morrison had said earlier the country has to "live with this virus" even as the country braces for Christmas celebrations.

New South Wales, Victoria and Queensland have witnessed a surge in COVID-19 cases as the country reported over 3,800 cases in the last 24 hours.

Victoria which has been severely hit with the virus recorded over 1,500 new COVID-19 cases and seven deaths even as the state has ramped up its vaccination drive. The state has so far reported 19 Omicron cases, reports said.

Australia has continued to ease restrictions for fully vaccinated international travellers arriving in Melbourne and Sydney.

The travellers no longer need to isolate for 72 hours although they need to show a PCR test within 24 hours of their arrival but once they get a negative test they needn't isolate.

Australia had earlier imposed one of the world's toughest restrictions with non-citizens barred from entering the country.

Australia has so far recorded over 240,000 COVID-19 cases and 2,130 fatalities. However, the country has witnessed a surge in cases with the Delta strain dominating the country.