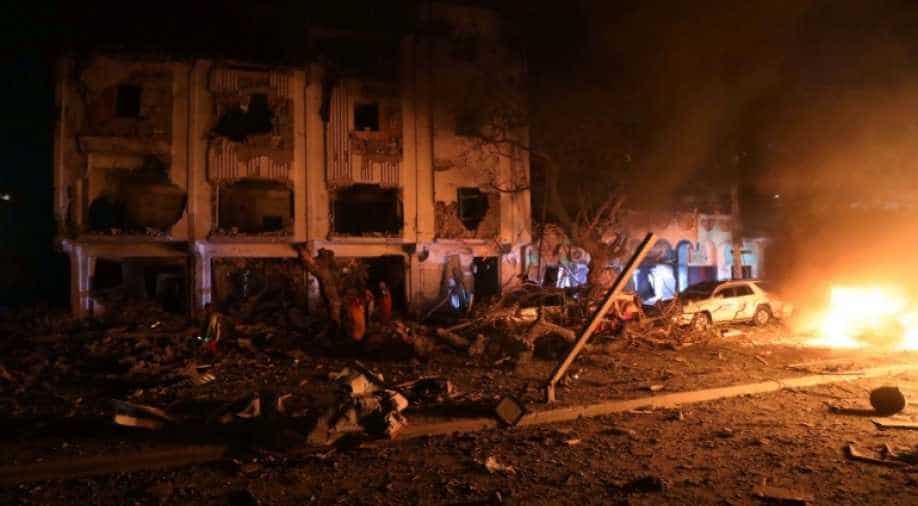 Flames are burning at the scene where a suicide car bomb exploded targeting a Mogadishu hotel in a business center in Maka Al Mukaram street in Mogadishu, Somalia. Photograph:(Reuters)
Follow Us

It was one of the heaviest blasts to have hit Mogadishu in recent times.

It was one of the heaviest blasts to have hit Mogadishu in recent times.

It took place in a business centre in Maka Al Mukaram street which has hotels, shops and restaurants, Police Major Mohamed Hussein told Reuters. Cars in the street were set ablaze.

"Over ten people died. A hotel is burning and other buildings were ruined by the blast. Twenty injured people were carried out. We believe more dead bodies are in the ruined buildings," Police Major Abdullahi Ali said.

He later said, "We killed 20 people including government officials and soldiers and we are still inside Hotel Maka Al Mukaram."

Ali said he did not believe the militants were inside the hotel. "But anything can happen because it is dark in some of the buildings because the blast cut the electric wires," he said.

When contacted later he disputed Al Shabaab's claim of more casualties but said the number of those killed could rise.

"Ambulances carried 10 dead people and 40 others injured. The death toll is sure to rise because we believe there are more casualties inside the hotel building and the Al Shabaab militants are anticipated to be inside," he told Reuters.

Residents close to the blast scene said they can hear sporadic exchanges of gunfire.

Stinking gases from the blast reached several kilometres (miles) away from the scene.

Somalia has been convulsed by lawlessness and violence since 1991. Islamist group Al Shabaab is fighting to dislodge a Western-backed government protected by African Union-mandated peacekeepers.