As vaccines trickle into Africa, Zambia’s challenges highlight other obstacles 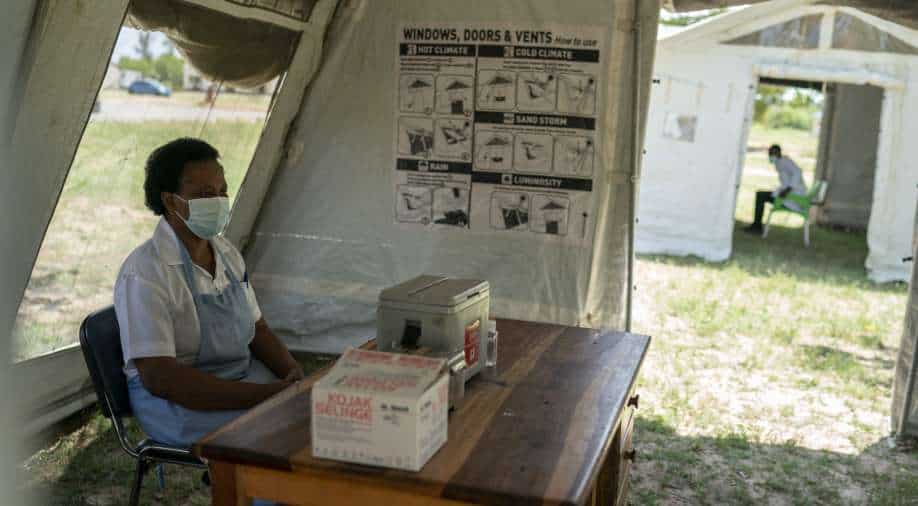 A COVID-19 vaccination site at a hospital in Chongwe, Zambia Photograph:( The New York Times )

For months, the biggest challenge to vaccinating Africans against COVID, and protecting both the continent and the world from the emergence of dangerous variants, has been supply: A continent of about 1.4 billion people has received just 404 million doses of vaccine, and only 7.8% of the population is fully vaccinated

Four people turned up at a health clinic tucked in a sprawl of commercial maize farms on a recent morning, looking for COVID-19 vaccines. The staff had vials of the Johnson & Johnson vaccine stashed in the fridge, but the staff members apologetically declined to vaccinate the four and suggested they try another day.

A vial of the Johnson & Johnson vaccine holds five doses, and the staff was under orders not to waste a single one.

Ida Musonda, the nurse who supervises the vaccination effort, suspected that her team might have found more takers if they packed the vials in Styrofoam coolers and headed out to markets and churches. “But we have no fuel for the vehicle to take the vaccines there,” she said.

They vaccinated 100 people on their last trip to a farm; the records from that trip sat in a paper heap in the clinic because the data manager had no internet connection to access an electronic records system.

For months, the biggest challenge to vaccinating Africans against COVID, and protecting both the continent and the world from the emergence of dangerous variants, has been supply: A continent of about 1.4 billion people has received just 404 million doses of vaccine, and only 7.8% of the population is fully vaccinated.

But as supply has begun to sputter into something like a more reliable flow, other daunting obstacles are coming into focus. All of them are on view at and around Ngwerere.

Weak health care systems with limited infrastructure and technology, and no experience vaccinating adults, are trying to get shots into the arms of people who have far more pressing priorities. At the same time, the global flow of information, and deliberate misinformation, on social media is generating the same scepticism that has stymied vaccination efforts in the United States and other countries.

Some Zambians are hesitant, but others have an attitude that could better be described as vaccine indifference. This is a poor country where the economy has contracted sharply during the pandemic, and many unvaccinated people are more focused on putting food on the table.

“I’d like to get it, but I work Monday to Saturday, and I don’t know if they vaccinate on Sunday,” said Bernadette Kawango, who supports a large extended family with her wages from an auto parts store in a low-income neighbourhood on the edge of Lusaka, the capital. She has heard many rumours: that people who receive the vaccine will die in two years, that the vaccine is part of a plot by Europeans to kill Africans and take their land, that Bill Gates is on a campaign to reduce the world population.

Such stories make her roll her eyes. But COVID is not at the top of her list of health care worries. “It’s cholera season, and people have malaria, and there is HIV and TB,” she said. She does not know anyone who has been diagnosed with COVID.

All these challenges create two major problems. First, the pace of vaccination is far too slow to prevent unnecessary deaths in a fourth wave, which is already beginning in southern Africa, or to prevent the emergence of new variants such as omicron, which was first identified in South Africa late last month. The vaccines in stock — many of them donations close to their expiration dates when they arrive — may not be used before they must be destroyed.

Second, the push to vaccinate against COVID is drawing resources from health systems that can hardly spare them, which could lead to disastrous consequences for the fight against other devastating health problems.

At the Ngwerere health clinic, the usual bustle and screeching at the mother-and-child health area, where babies are monitored for signs of malnutrition and given childhood immunizations, was absent because everyone on that staff had been repurposed as COVID vaccinators.

“Every time we have a wave here it really threatens the investments that have been made in HIV, maternal and child health, and TB and malaria, and it’s important that we protect those,” said Dr Simon Agolory, who runs the large Zambia program of the U.S. Centers for Disease Control and Prevention.

Dr Andrew Silumesii, director of public health for Zambia’s health ministry, said there was clear evidence that infant growth monitoring and childhood immunization had declined over the course of the pandemic. He worries that malaria, TB and HIV infections will also increase.

So far, 7% of Zambians have been vaccinated against COVID, according to Silumesii. President Hakainde Hichilema has set a target of vaccinating another 2 million by Christmas, and 70% of the population by the third quarter of 2022, a goal that looks exceedingly ambitious.

Zambia’s vaccines come mostly from Covax, the global vaccine-sharing initiative, with additional donations from China and the African Union. The fact that Zambia is dependent largely on donations means that it must adapt its program to whatever shipments arrive — a bit like making a meal with whatever arrives in a farm subscription box. The country is managing distribution of five different vaccines, each with different dosing regimens, storage requirements and vial volumes.

That has created a huge additional administrative burden for skeleton staffs such as Musonda’s team. Her staff has no budget for cellphone calls to remind people about second shots, and the effect can be seen in the charts stapled on the vaccination room wall: Of the 840 people who received a first dose of the AstraZeneca vaccine in April, only 179 came back for a follow-up shot in July.

When Zambia experienced a severe third COVID wave earlier this year, media coverage of people dying in the parking lots of hospitals that ran out of oxygen rattled a population that had been thinking of the virus as something that affected only white or rich people. There were predawn lineups outside vaccination sites that couldn’t keep shots in stock.

But when the wave abated, so did the demand.

Many people here recall the time when Zambians were dying of AIDS in huge numbers, and Western pharmaceutical companies refused to produce affordable lifesaving medications. There is scepticism now that those same companies have come offering free solutions.

Vaccine misinformation spreads on TikTok and WhatsApp, and in evangelical churches where pastors warn that the shot “contains the mark of the beast.”

“No matter how educated people are, if their pastor says don’t trust the vaccine, they don’t trust,” said Dr Morton Zuze, the clinical care coordinator at Chongwe District Hospital, where seven staff members sat idle in an empty vaccination tent.

As in the United States, there are false rumours in Zambia that the vaccine causes female infertility or erectile dysfunction. Zambians have heard AstraZeneca is not being used in many countries because of reports of blood clots in a very small number of people who received that shot. “It’s a global village, and everyone can switch on CNN,” Zuze said.

Zambia normally vaccinates only small children, and it has no primary care practices. An adult goes to a clinic only when pregnant or receiving HIV treatment, or in an emergency.

Dr Lawrence Mwananyanda, an assistant professor with the Boston University School of Public Health and a special adviser to Hichilema, said the government must balance between trying to create vaccine demand and not creating too much, when it can’t be sure if it will have the supply to deliver.

“To just walk up — and these health facilities are sometimes very far away, 2, 5, 7 kilometres away, and people don’t have cars, you have to be very motivated — sometimes people have gone to a health facility, and then there is no vaccine,” he said. “All they are told is, ‘You can only vaccinate if there’s five or six people, so you can’t be vaccinated today’. How likely are you to come back?”

Charity Machika was vaccinated recently at a rural health centre in Chongwe district. She went to the clinic for a prenatal checkup and then was encouraged to head to the next building, where the HIV treatment centre was repurposed for vaccinations. “I was scared because people say a lot of stories, that I will faint, that I will not be able to walk, that I will die,” she said. “I took the risk to come and protect myself and my baby.”

She is the only vaccinated person in her family. Her husband tried twice but the sites he went to never had vaccines in stock, and it was difficult for him to find the time to make the 4-kilometre walk to try again, she said.

Felix Mwanza, a veteran HIV activist in Lusaka, said the government had yet to tap into the vast network of HIV and TB treatment activists in the country. “We seem not to learn from our past,” he said, recalling how testing and treatment for HIV only reached critical mass when care was delivered in bars, at schools and on doorsteps.

“If they don’t use the structures we already have, donors will keep sending the vaccines and they’ll pile up here and expire and then they won’t send us anymore,” he said.

Mwananyanda said the key strategy for the planned rapid scale-up in vaccination was to do exactly that, taking vaccines to people in malls and at bus stops.

Amid the scramble, no one is thinking about what happens next. “We’re really just addressing the vaccination problems for now — but we don’t have a system for the long run,” said Agolory. “And what are we going to do when boosters are needed or if there’s some new variants that escape the vaccine altogether, and we need to start from zero and give people more vaccines?”

Zambia will need help procuring more, and it will need funding to help bring on temporary health care workers to administer vaccines so that existing programs, like the Ngwerere mother-and-child clinic, are not abandoned, Agolory said.

Even with a huge boost in vaccination rates, the country won’t have enough coverage to blunt the coming wave, or, most likely, the one after it.

“I am hoping that we keep receiving vaccines so that we don’t get into a situation where people need vaccines and they can’t get them,” said Silumesii. “The flip side, which is something that I would really hate to see happen, is where we have brought in vaccines, and we don’t have enough demand and vaccines go to waste. These are vaccines that cost a lot. Definitely that pinch would sting so badly.”