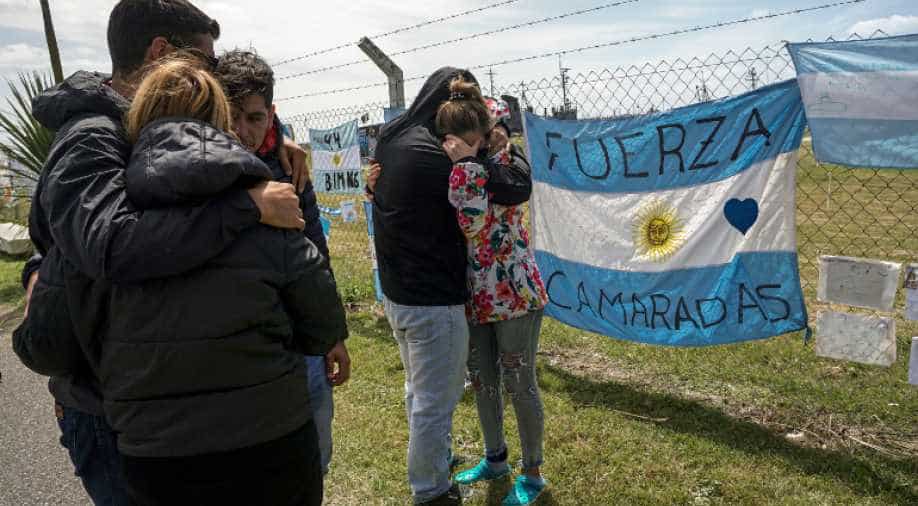 'We are in the middle of a tragedy. The atmosphere in the navy is absolute consternation, anguish and pain. We lost 44 comrades,' said the officer. Photograph:( AFP )

Argentina's navy on Thursday formally ended its search for survivors from the San Juan submarine, two weeks after the vessel went missing in the South Atlantic with 44 crew aboard.

The Navy has shifted its mission from rescue to recovery, spokesman Enrique Balbi told reporters.

He said while it was not possible to definitively confirm the crew had perished, "no evidence of a shipwreck was found in the areas explored" and the international rescue effort had continued for "twice the time" it was estimated they could have survived.

"Despite the vast efforts made, we have been unable to locate the submarine," he said, though adding that international efforts to find the vessel would continue.

A senior Argentine navy officer was more blunt, saying that there was now no expectation of survivors.

"We are in the middle of a tragedy. The atmosphere in the navy is absolute consternation, anguish and pain. We lost 44 comrades," said the officer, who spoke on condition of anonymity.

In addition to the loss of life, "half of Argentina's submarine capacity was lost," the officer said.

The country now has one active sub, while a second is undergoing repairs.

The US Navy said Thursday it had deployed an unmanned recovery vehicle to join the hunt. The US had already provided other assistance, as did about a dozen other countries.

The Navy's final contact with the ARA San Juan, a 34-year-old German-built diesel-electric sub, came on November 15, when it was sailing in the South Atlantic 450 kilometres (280 miles) from the coast.

Explosion on board likely

In its final communication, the submarine reported it had overcome a mechanical breakdown that resulted from a short circuit due to the entry of water via the vessel's snorkel.

Three hours later, a noise similar to an explosion was recorded 48 kilometres from where the crew had given its last report.

The position was in line with the path the submarine would have taken to reach its base in Mar del Plata as planned, the Navy has said.

An international armada of rescue ships backed by aircraft, and thousands of personnel, has been hunting for the submarine for days, with no success.

Relatives of the missing had mixed feelings about Thursday's announcement.

"They just threw away the last hope we had," said Luis Tagliapietra, the 46-year-old father of one of the missing submariners.

But Jorge Villareal, whose son Fernando was the ship's lieutenant, refused to give up.

"I continue to maintain my hope and faith. Our optimism is intact, no matter what they say," Villareal told AFP.

The loss of the submarine represents a huge blow to the country's already under-equipped military.

And the Navy has come under fire for its handling of the tragedy, as it failed to mention the problem reported by the vessel for several days after its disappearance.

Argentine President Mauricio Macri last week ordered an inquiry into the missing submarine, saying it requires "a serious, in-depth investigation that will yield certainty about what has happened."