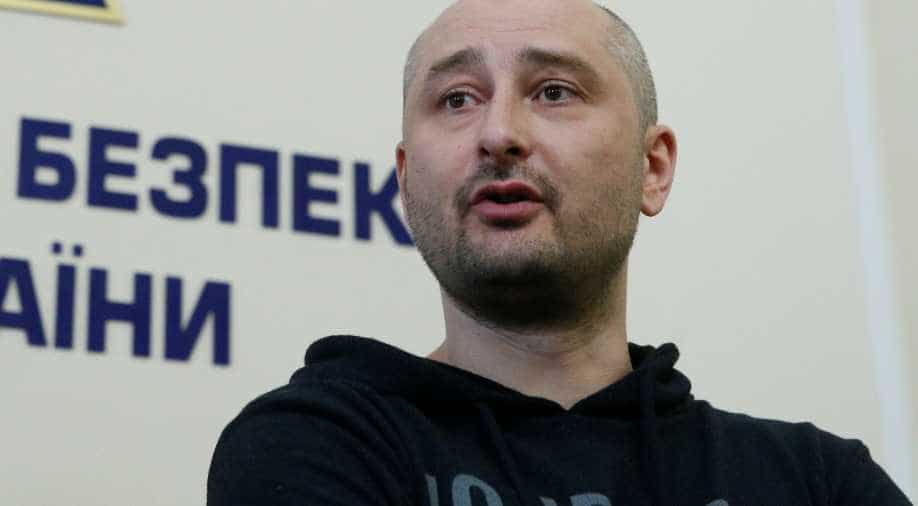 Anti-Kremlin journalist Arkady Babchenko, who has dismissed criticism of helping stage his own death, disclosed Thursday some details of the ruse that fooled the world for a day.

Babchenko made a shocking reappearance at a press conference in Kiev on Wednesday, more than 12 hours after the Ukrainian authorities reported he had been shot dead at his home in a contract-style killing.

Ukraine's SBU security service said the ruse was meant to foil a real assassination plot against Babchenko ordered by Russia and has arrested the organiser of the crime.

"From what I know, planning for the special operation got under way two months ago," Babchenko told journalists, adding he was brought into it one month ago.

Babchenko said that at first, he was incredulous and even angry at the SBU, but changed his mind when he saw the very detailed information the hit man had on him.

Babchenko left Russia in February 2017 after receiving threats, living first in the Czech Republic, then in Israel, before moving to Kiev.

He contributed to a number of media outlets including top opposition newspaper Novaya Gazeta and is an avid blogger, accusing Russian authorities of killing Kremlin critics and unleashing wars in Ukraine, Syria and elsewhere.

After Babchenko agreed to cooperate, they needed to cut down on his leaving his apartment.

"To reduce the danger we came up with a cover story that I had broken a leg in order to explain why I wasn't leaving home," said Babchenko, who served as a soldier in both Russia's campaign's in Chechnya before becoming a war correspondent.

Despite the detailed planning the operation had to be rushed into action.

"They began to put pressure on the guy (the hitman) because they had given him three weeks to carry it out," said Babchenko, adding they had planned to stage the killing on June 1.

The day of the operation the makeup artist arrived at his apartment at six in the morning.

"We had already thought out how it would happen, that the murder would take place on the landing when I opened the door" to go inside, he said.

Moreover, Babchenko said he was instructed how to lay down like a dead person in order to fool any chance witness.

"I had real pig's blood. They covered my mouth, nose and the three bullet holes with it. And behold, I'm dead," said Babchenko.

Then began the operation to deceive the media, the public, and most importantly, the person who ordered the killing.

"My wife called the police, then the ambulance. The Berkut (police SWAT team) came in an instant, I didn't expect that. I want to congratulate them, they immediately checked the rooms, the safety of the stairwells, like in a film. They didn't know about the operation," said the journalist.

Ukrainian authorities told the media that Babchenko had died in the ambulance, but he said the show continued until "they closed the door of the morgue behind me."

"There, they resuscitated me," said Babchenko.

Between the staged murder and his arrival at the morgue, four hours had elapsed during which Babchenko successfully fooled the Ukrainian police and the world.

Then began the waiting: "I watched the news, how far they went in saying I was a nice guy."

Eventually, he was moved out of the morgue to avoid being caught by a persistent journalist.

"I was taken to a safe location. It finished only at five in the morning. Then I could go to sleep."