'An age of peace, from the starting point of history,' Kim writes in guestbook 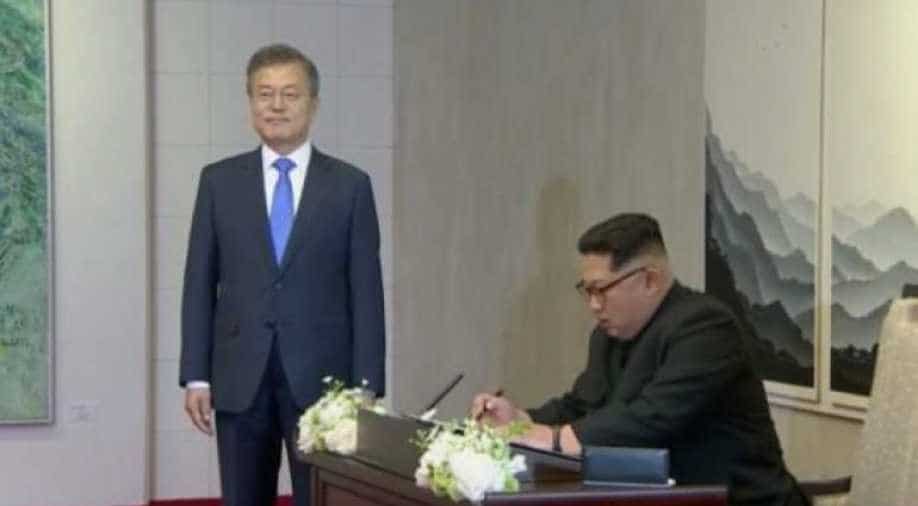 A picture of Kim's message was posted by Moon's office.

When the two Korean leaders met earlier today, ahead of the historic summit, they were all smiles and niceties. North Korean leader Kim Jong Un and South Korean President Moon Jae-in were spotted holding hands at the heavily fortified demilitarised zone between the countries on Friday.

As Kim crossed the DMZ line, he became the first North Korean leader to set foot in the South since the 1950-53 Korean War. Moon greeted Kim at the military demarcation line at 9:30 am (Korea time).

The two were handed flowers by a South Korean boy and girl, residents of a village situated in the demilitarised zone.

Kim stopped to sign a guest book in the South's Peace House before the two leaders met for a private discussion.

After entering the Peace House for the inter-Korean summit, Kim Jong Un wrote in the guest book "A new history starts now. An age of peace, from the starting point of history," Kim dated and signed the entry.

A picture of Kim's message was posted by Moon's office.

Moon and Kim are expected to talk denuclearisation and exchanges between the Koreas and also will plant a memorial tree at the border truce village of Panmunjom.

The United States is hopeful talks between Kim and Moon will make progress on achieving peace and prosperity, the White House said in a statement as the two men began their summit.