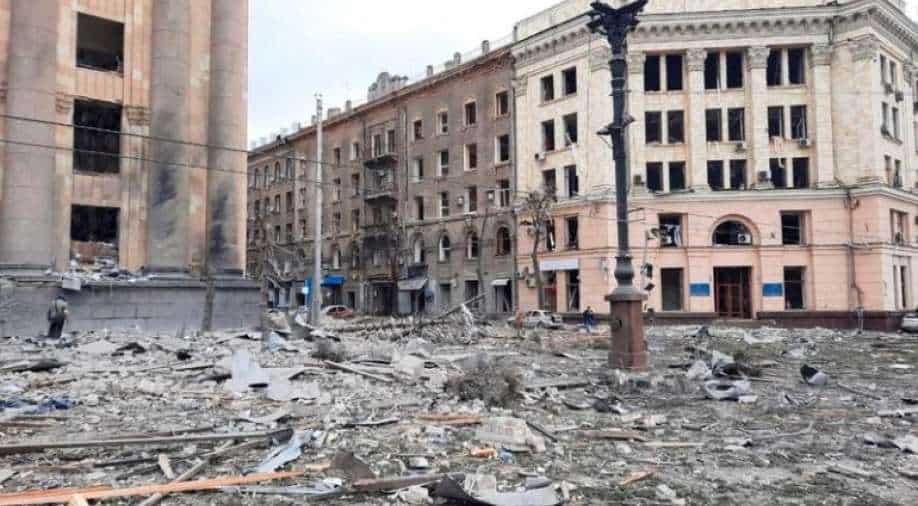 A view shows the area near the regional administration building, which was hit by a missile according to city officials, in Kharkiv, Ukraine, in this handout picture released March 1, 2022. Photograph:( Reuters )

During the investigation conducted by Amnesty International in the aftermath of the Kharkiv raids, they found that around 606 civilians were killed because of the bombing while 600,000 fled.

Amnesty International has accused Russia of committing war crimes during their shelling over the Ukrainian city of Kharkiv. The Russia-Ukraine conflict has already crossed 100 days and Amnesty said on Monday that Russia attacked Kharkiv with scattered mines and cluster munitions resulting in the death of hundreds of civilians. While the use of cluster munitions during any conflict is considered to be a war crime by a number of countries, both Russia and Ukraine have never signed any international agreement which stops them from using the weapons.  However, Amnesty International research consultant Jean-Baptiste Gallopin told Reuters that the use of such weapons is not tolerated.

During the investigation conducted by Amnesty International in the aftermath of the Kharkiv raids, they found that around 606 civilians were killed because of the bombing while 600,000 fled. They also confirmed the use of both cluster munitions and scatterable mines during the Russian attack.

"The repeated bombardments of residential neighbourhoods in Kharkiv are indiscriminate attacks which killed and injured hundreds of civilians, and as such constitute war crimes," Amnesty said.

The Amnesty report also held Ukrainian forces responsible for violation of international humanitarian law by positioning artillery near residential buildings. According to the Reuters report, Gallopin said that the presence of the artillery made the buildings an easy target for the Russian bombers but added that this "in no way justifies the relentless indiscriminate shelling of the city.

“The people of Kharkiv have faced a relentless barrage of indiscriminate attacks in recent months, which killed and injured hundreds of civilians,” said Donatella Rovera, Amnesty International’s senior crisis response adviser according to the Reuters report.

“The repeated use of widely banned cluster munitions is shocking, and a further indication of utter disregard for civilian lives. The Russian forces responsible for these horrific attacks must be held accountable for their actions, and victims and their families must receive full reparations,” he added.