All indications Russia 'on brink' of invading Ukraine, says Blinken 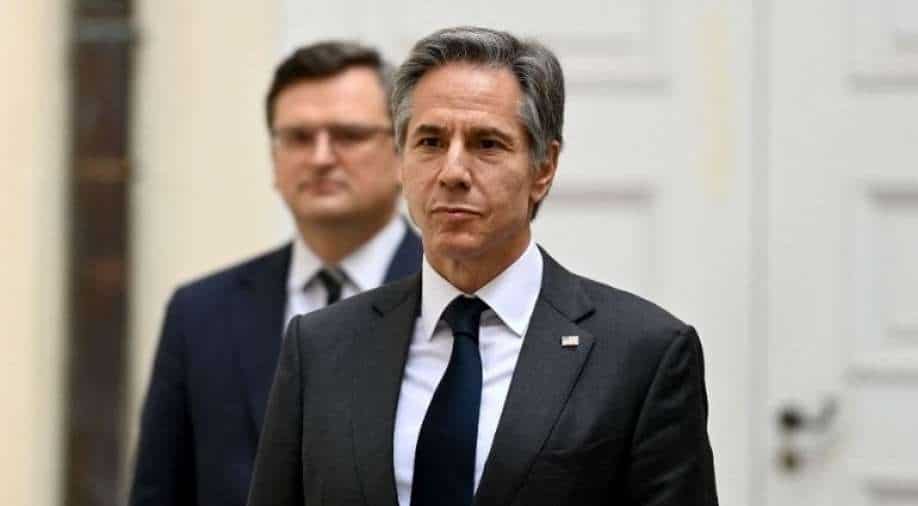 US Secretary of State Antony Blinken (R) stands close to Ukrainian Foreign Minister Dmytro Kuleba as they meet with the Foreign Ministers of the G7 Nations on the sidelines of the Munich Security Conference (MSC) in Munich, southern Germany Photograph:( AFP )

Speaking on broadcaster CNN'S State of the Union show, Blinken, however, added that the United States was committed until the last minute to using every opportunity to see if diplomacy can dissuade Russian President Vladimir Putin from going ahead with an invasion

US Secretary of State Antony Blinken has said that all indications point towards Russia being ''on the brink'' of invading Ukraine.

Speaking on broadcaster CNN'S State of the Union show, Blinken, however, added that the United States was committed until the last minute to using every opportunity to see if diplomacy can dissuade Russian President Vladimir Putin from going ahead with an invasion

"Everything we are seeing suggests that this is dead serious, that we are on the brink of an invasion. We will do everything we can to try to prevent it before it happens," Blinken said, adding that the West was equally prepared if Moscow invades.

"Until the tanks are actually rolling, and the planes are flying, we will use every opportunity and every minute we have to see if diplomacy can still dissuade President (Vladimir) Putin from carrying this forward," he said.

He told CBS's "Face the Nation" Biden has made "very clear that he's prepared to meet President Putin at any time, in any format, if that can help prevent a war."

Russia extended military drills near Ukraine’s northern borders Sunday amid increased fears that two days of sustained shelling along the contact line between soldiers and Russa-backed separatists in eastern Ukraine could spark an invasion.

The exercises were originally set to end Sunday and brought a sizable contingent of Russian forces to Belarus. The presence of the Russian troops raised concern that they could be used to sweep down on the Ukrainian capital, Kyiv, a city of about 3 million people less than a three-hour drive away.

Russian President Vladimir Putin blamed Kyiv for a military escalation in east Ukraine in a call with French leader Emmanuel Macron, but said diplomatic efforts to find a resolution needed to intensify.

Putin "noted that the cause of the escalation is provocations carried out by the Ukrainian security forces," according to a Kremlin readout of the call, which added however that the two leaders "believe it is important to intensify efforts to find solutions through diplomatic means".

Putin also repeated a call for "the United States and NATO to take Russian demands for security guarantees seriously".

Meanwhile, Ukraine president Volodymyr Zelenskiy on Sunday called for an immediate ceasefire in the eastern part of the country, where clashes between pro-Russian separatists and Ukrainian forces intensified in recent days.

He also said Ukraine supports peace talks within the Trilateral Contact Group, where Ukraine participates along with Russia and the Organization for Security and Co-Operation in Europe (OSCE).