All about love: In conversation with Turkish author Cemal Kafadar 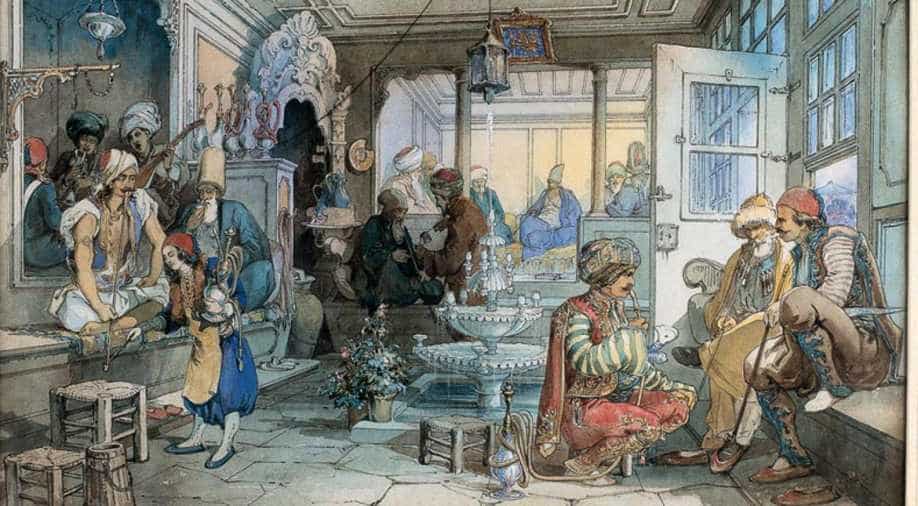 Cafe in Istanbul at the time of the Ottoman Empire Photograph:( Others )

History is the secret beau or mistress that keeps the romance alive, particularly when the present becomes overwhelmingly oppressive and dismal. It is also the love child of teleology and chronology, an unruly brat that cannot, need not, be transformed. It makes patterns and faces appear in the clouds and chipped wall paints of the present. Historians are the archetypal hapless lovers, ensnared by the bygone, groping their way through the mysteries of the beloved’s mind.

My conversation with Dr Cemal Kafadar, a professor of Turkish Studies at Harvard University, was all about love. Love that finds itself seeping into the stultifying jargon of academia and politics. Love that touches cultures with livewire and resurrects memories of days gone by without the need of lazy romanticisation.

Kafadar’s elaborately titled study ‘How Dark is the History of the Night, How Black the Story of Coffee, How Bitter the Tale of Love: The Changing Measure of Leisure and Pleasure in Early Modern Istanbul’ is his homage to his Turkish roots. He resurrects the romance of the Ottoman Empire without feeling the need to fall into the traps of clichés or compulsive sentimentalism.

How does he feel about being a Turk teaching Turkish Studies in a non-Turkish environment?

Kafadar thinks for a moment and begins, “It's a typical American situation. I have so many colleagues from different parts of the world, different backgrounds, teaching about their own society in the academic world of the United States. Obviously, for the students, it’s a very different kind of a subject. Especially for those who do not come from anything similar to the Ottoman world.” He pauses.

His eyes brighten as he continues about the students. “In America, you get students from so many diverse backgrounds. They come with questions and perspectives that you would never think of as an academic. Canadian, Mexicans, Africans, Middle Easterns, and South Asians who grew up in America, they all bring different perspectives to the classroom.”

The President of the United States of America may not share this view.

I’m curious to know about his approach towards resurrecting the past. Dark, black and bitter is how I like my coffee. But does my history book necessarily have to be so?

Kafadar is amused by the coffee reference and begins to explain the title of his study. “If you refer to just those adjectives in abstract people may think that you are telling a sad story that is not easy to enjoy and like. However, if you put it in the context of night time, coffee and tales of love, everyone is familiar with darkness, blackness, and bitterness. Like you said, these may denote coffee or chocolate preferences in a nicer, different way than those first connotations of dark, black, and bitter.”

Clearly, he has chosen the title after much deliberation.

“Through these adjectives, I signal what I'm studying: a confluence of transformations that have taken the world by a storm over a course of the last few centuries. Our usage of the night time, for example. We do much more with it now anywhere in the world than ever before. This trend started in the 16th century. We also consume much more of the social beverages of which coffee is merely one.”

He continues, “The history of coffee drinking makes for a story as interesting as about tea and teahouses. They should be considered together. Tea began to be grown in the south and east Asia in 15th and 16th centuries. The use of tea houses and coffee houses type settings where urbanites and middle-classes came together to enjoy and entertain together is also the story of the last four or five centuries."

This also happens to be the period of new literary genres, new literary attitudes and, thus, new forms of entertainment in these types of venues. Particularly, in terms of social forms of entertainment in the night time. For example, Kafadar reflects, "I can't think of cinema as a day-time activity. Like the theatre house, cinema is associated with the night time. With the development in the technology of lighting, the possibilities of the usage of the night time have been enhanced manifold. Compared to the year 1500, 2017 offers much more pleasures of the dark night. There are much more pleasures of black coffee, and even more of bitter romantic tales, enjoyed in social settings. In these three activities, I see a very significant thread of modernity.”

Resisting drowning in the full cup of history’s charm, I draw his attention towards contemporary Turkey. When he looks at it, who does he become: an academic or a Turk, deeply in love with his land?

Kafadar suddenly looks pensive and I’m beginning to wonder if I should have stayed with history instead. He takes a few moments before declaring, “It is a very difficult and challenging time. Going through may sound too optimistic.”

He recounts, “Two weeks ago I left Istanbul after several months of writing and researching, spending time with the family, engaging with current affairs. I left with a very heavy heart. But this is shared and true of anyone I know in Turkey, irrespective of whether they support the government or not. Everyone agrees, whatever their political associations may be, that Turkey is going through a very difficult time. And in short term, I see nothing much on the positive side.”

The lament of the Turk. But the academic catches up quickly. “If you ask me for a pattern, in modern Turkish history there have been moments of severe crisis. To use topology, modern Turkish history offers openings and bottlenecks (he makes demonstrative gestures) one after another. Whether it’s going upwards or sideways, I’m not really sure. Right now, Turkey is definitely going through a bottleneck. I hope there is an opening but I don’t know how, where and when it will come.”

He goes on, “One cannot think of Turkey as an isolated incident. Authoritarian and populist trends are there in many different countries and Turkey is a part of that overall trend. Many people have written about this. There is the incessant talk on parallels between Modi and Erdogan, Putin and Trump, Trump and Erdogan and so on. There is something to it. However, one can easily exaggerate because each country has its unique circumstances."

The question on his chosen homeland had to be asked at this juncture.

He asks, “You mean what I think of Putin?” Bites his tongue and laughs. “Oh, see my lapses…I said, Putin!” He laughs and then suddenly becomes serious. “I am disappointed. When he started his bid and almost every Pundit said ‘No way! He won’t go beyond this point…’ One after the other, he proved everybody wrong. By the time he was running against Hilary Clinton, I thought he really had a chance to win, and he did.” He shares his disappointments.

“I am not very happy with the populist nationalist turn that’s happening everywhere in the world. Trump has now become part of that chorus. The leader of this chorus as the leader of the strongest nation with much clout. There is some truth in this joke that everyone in the world should vote in the US presidential elections because everyone is somehow influenced and affected by what happens in the US.”

He adds, “His anti-elitist attitude may sound likable at some level. We always tend to say, oh the elites are bad etc. But Trump’s attitude towards institutions in media, academia or elsewhere that to him represent the old guard elite is also scary to me. He doesn’t seem to be thinking of reform in a co-operative manner, it seems to be for his populism and popularity. This is going directly against these institutions and there’s not much to be gained for anyone from this kind of crude anti-elitism.”

Like history or a fulfilling love affair, this conversation could go on forever but the present moment has its eyes set elsewhere. Nevertheless, history will keep flitting across its gaze.