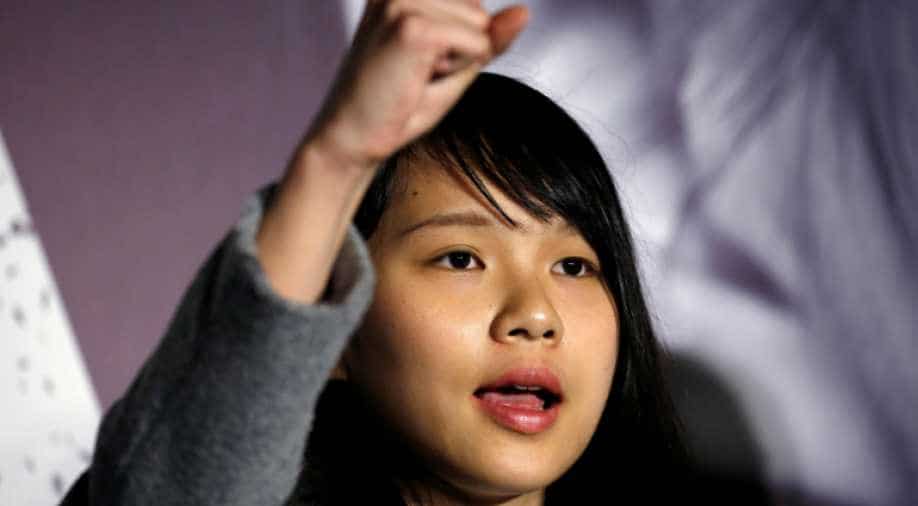 Agnes Chow hails from a generation of Hong Kong democracy activists who cut their teeth in politics as teenagers and are now being steadily silenced by China.

The 24-year-old, one of the democracy movement's most recognizable faces, served just under seven months behind bars for her role in an "unlawful assembly" outside the city's police headquarters during 2019's huge and often violent democracy protests.

She was jailed alongside two other well-known youth activists, Joshua Wong and Ivan Lam. She entered the fraught world of Hong Kong's politics early.

Chow has described growing up in an apolitical Catholic household.

But at the age of 15, she joined the youth-led movement protesting against plans to implement "moral and national education" in public schools.

Students feared the plan would herald the kind of heavily censored education seen on China's mainland.

They staged huge sit-ins and the plan was eventually shelved in a rare example of protest forcing a Hong Kong government climbdown.

It was during those demonstrations she met fellow teen activist Wong.

Two years later, Wong, Chow, and other students were key figures in the "Umbrella Movement" -- 79 days of sit-ins and rallies sparked by Beijing's refusal to make good on its promise to one day grant Hong Kongers universal suffrage.

The protests were peaceful, but not successful.

Yet, a whole new generation of opposition politicians was forged in those rallies.

They would go on to become a major thorn in the side of Beijing as it tried to tighten its grip on the semi-autonomous financial hub, which was increasingly chafing under Chinese Communist Party rule.

She gave up a British passport to stand for Hong Kong's partially elected legislature, only to be barred from standing because her party advocated "self-determination".

Since then it has become common for authorities to disqualify politicians for the views they hold.

A new law passed last month will vet anyone standing for public office for their political loyalty, a campaign Beijing has called "Patriots rule Hong Kong".

One of Chow's most successful roles has been bringing international attention to the city's democracy movement, aided by fluency in English, Cantonese, and Japanese. She built a huge social media following in Japan in particular.

Her Twitter account, which primarily publishes in Japanese, has more than half a million followers. Chow may not be free for long.

She was one of the first opposition politicians to be arrested under Beijing's new security law -- for allegedly "colluding with foreign forces" by campaigning for sanctions. She has not yet been charged.

But if prosecutors take that step, she will almost certainly be denied bail and sent back to custody.

More than 100 people, including some of the city's most prominent democracy activists, have been arrested under the new law.
Most of those charged are denied bail and those who are convicted face up to life in jail.