After Trump, Biden and G7 refocus on Covid recovery 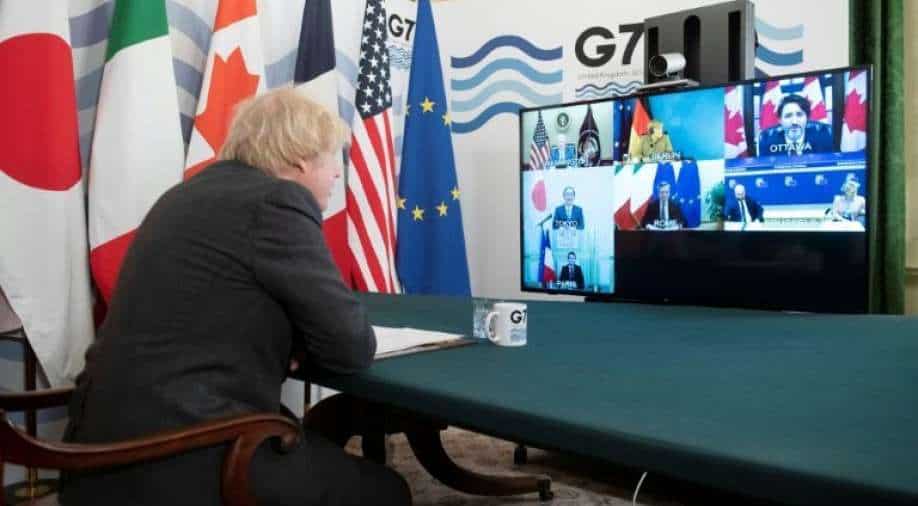 British Prime Minister Boris Johnson, this year's chair of the G7, vowed to free up any surplus UK vaccines for poorer countries at a future date, and underlined the need for collective action to recover from the pandemic.

Wealthy G7 powers on Friday ramped up health funding for poorer nations after accusations they are hoarding coronavirus vaccines, as US President Joe Biden and the rest of the leaders declared a "turning point" from the psychodramas of the Trump era.

British Prime Minister Boris Johnson, this year's chair of the G7, vowed to free up any surplus UK vaccines for poorer countries at a future date, and underlined the need for collective action to recover from the pandemic.

"We've got to make sure the whole world is vaccinated because this is a global pandemic and it's no use one country being far ahead of another, we've got to move together," he said in opening remarks at the online summit, the G7's first since last April when the group was rent apart by then president Donald Trump.

At the G7, Biden brought a pledge of $4 billion (4.6 billion euros) in US aid to the UN's Covax fund to buy vaccines for global distribution.

Germany said it was giving an extra 1.5 billion euros for the global rollout, and the European Union doubled its own Covax funding to one billion euros.

The total in G7 commitments stands at 7.5 billion euros, the group said in a joint statement following the talks.

"Drawing on our strengths and values as democratic, open economies and societies, we will work together and with others to make 2021 a turning point for multilateralism and to shape a recovery that promotes the health and prosperity of our people and planet," the leaders added.

But ahead of the gathering, French President Emmanuel Macron had demanded richer nations go further by transferring 3-5 percent of their existing stock to Africa.

"It's an unprecedented acceleration of global inequality and it's politically unsustainable too because it's paving the way for a war of influence over vaccines," he told the Financial Times, as Russia and China step up free or low-cost distribution of their own jabs.

The ONE Campaign, a global organisation co-founded by U2 singer Bono, said the G7 members plus Australia had collectively bought nearly 1.25 billion more doses than they needed to inoculate every member of their populations against Covid-19.

Biden became the first US president to address the Munich meeting, underlining a decisive shift after cooperation was all but broken under his go-it-alone predecessor.

The struggle worldwide between democracy and autocracy is at an "inflection point", Biden told the Munich conference.

"And I believe with every ounce of my being that democracy must prevail."

"Multilateralism is boosted through the change in the US government -- the Biden administration has already demonstrated this with its first decisions" on returning to the Paris climate accord and rejoining the World Health Organization (WHO), she said.

Though Friday marked America's formal re-entry to the Paris climate accord, in a departure from Trump-era politics, Biden has maintained his predecessor's mistrust of China.

Beijing is not part of the G7 -- which comprises Britain, Canada, France, Germany, Italy, Japan and the US -- and Washington is repositioning rich democracies as a counterweight amid mistrust of China's initial handling of Covid-19.

At Britain's urging, the G7 agreed to look into a possible pandemic treaty to enhance early warning and data transparency in case of future outbreaks.

London denies it has China in its sights, but the Asian power has been widely accused of covering up the emergence of the virus in late 2019 and depriving the WHO of vital early information.

Now that inoculation campaigns are picking up speed -- in the West at least -- G7 leaders also hope to look past the pandemic to financial recovery after lockdowns ravaged many economies.

Biden also said the world can "no longer do the bare minimum on climate", as Britain prepares to host the UN's next climate summit, COP26, in the Scottish city of Glasgow in November.

COP26 will cap a busy diplomatic year that will flesh out Johnson's vision of a "Global Britain", following its Brexit withdrawal from the EU.

He hopes to host the G7's leaders in person in June, at a resort in southwest England.