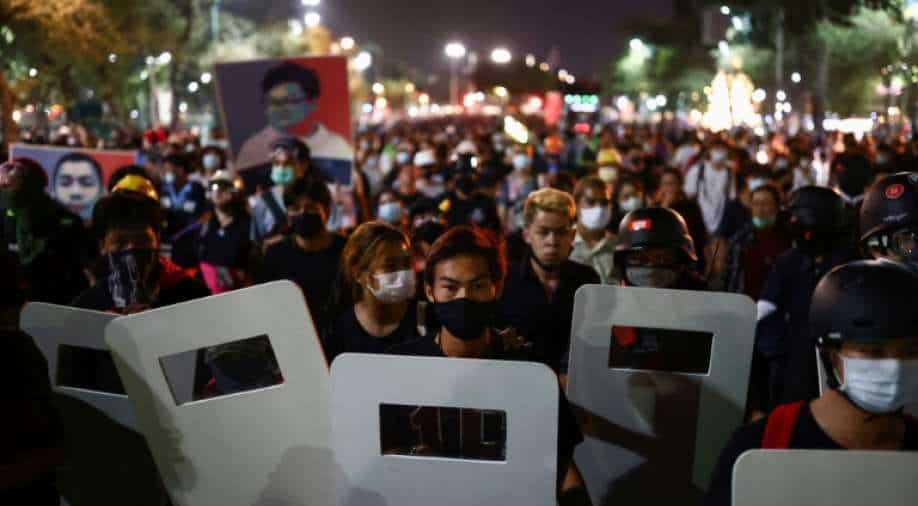 Another protest demanding the release of jailed activists is planned for late Monday, raising prospects for more confrontation, with activists calling for an end to military dominance of politics and reform of the powerful monarchy

Thai police on Monday vowed to arrest more people participating in anti-government protests after detaining nearly 100 at a demonstration a day earlier, citing a law restricting gatherings to prevent the spread of coronavirus.

Another protest demanding the release of jailed activists is planned for late Monday afternoon, raising prospects for another confrontation, with activists calling for an end to military dominance of politics and reform of the powerful monarchy.

Piya said 99 people were arrested on Sunday in front of Government House, saying the arrests were necessary under a law forbidding large public gatherings to prevent coronavirus spread.

The mostly student-led movement has taken aim at the military for entrenching its role in civilian politics, especially since Prime Minister Prayuth Chan-ocha seized power in a 2014 coup when he was army chief.

The activists say elections held in 2019 were under rules designed to cement Prayuth's hold on power. Prayuth and his coalition government allies say the vote was free and fair.

Prayuth on Monday told reporters the weekend arrests were justified.

"You have to look at the law. If I don't take action, there will be disruption in traffic. We are just taking back space. There have been many warnings," said Prayuth.

Dozens of people have been detained at protests in recent months under disease control and public order laws, but Sunday's protest represented one of the largest number of arrests at a single rally.

Additionally, at least nine leaders of the movement are jailed pending trial under a law against insulting the Thai monarchy, which carries a maximum 15-year penalty.