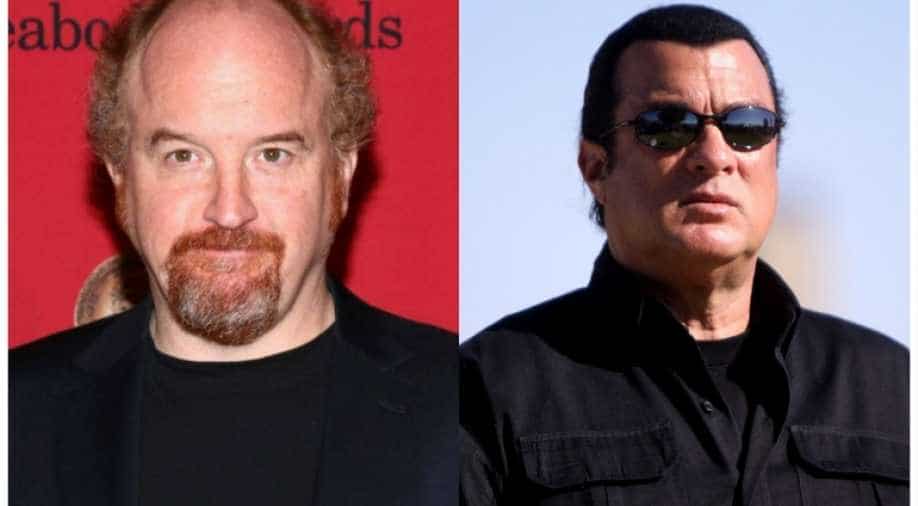 US action movie actor Steven Seagal and comedian Louis CK were the latest stars in the crosshairs of mounting sexual misconduct allegations on Thursday, following the downfall of Harvey Weinstein and Kevin Spacey.

Portia de Rossi, the "Arrested Development" actress and wife of chat queen Ellen DeGeneres, accused the former martial arts expert and blues musician over an undated audition for a Seagal movie in his office.

"He told me how important it was to have chemistry off-screen as he sat me down and unzipped his leather pants," the Australian-born actress tweeted late Wednesday.

"I ran out and called my agent. Unfazed, she replied, 'well, I didn't know if he was your type.'"

My final audition for a Steven Segal movie took place in his office. He told me how important it was to have chemistry off-screen as he sat me down and unzipped his leather pants. I? ran out and called my agent. Unfazed, she replied, “well, I didn’t know if he was your type.”

DeGeneres retweeted the post to her more than 75 million followers saying: "I'm proud of my wife."

Seagal's representatives did not immediately respond to requests for comment.

Actress Jenny McCarthy, who first accused Seagal in 1998, on Thursday revisited her encounter with the actor when auditioning for his 1995 movie "Under Siege 2" when he allegedly asked her twice to lower her dress.

Telling him she had been told there was no nudity, Seagal allegedly told her "there is off-camera nudity." After she refused and ran to her car, McCarthy said he followed her outside and told her not to tell anyone "or else."

Seagal's fame peaked in the late 1980s and early 1990s with films such as "Under Siege" and "Above the Law," although he remains popular in eastern Europe.

He was last year accorded Russian and Serbian citizenship, personally collecting his Russian passport from President Vladimir Putin at the Kremlin.

Julianna Margulies last week recounted an unpleasant encounter with the 65-year-old star, with whom she appeared in the 1991 movie "Out for Justice."

Margulies, who later shot to fame for her role in 1990s hit series "ER" and more recently in "The Good Wife," said a female casting director told her Seagal wanted to go over a scene with her in his New York hotel room at night.

Margulies, 23 years at the time, said that when she arrived she found the actor alone. "He made sure that I saw his gun, which I had never seen a gun in real life," she told Sirius XM. "I got out of there unscathed," she said.

On Thursday, the premiere of his new movie "I Love You, Daddy," was abruptly cancelled, and the award-winner canceled an appearance on CBS comedy chat show "The Late Show With Stephen Colbert," the Times reported.

CK's publicist, Lewis Kay, told the paper that the comedian would not respond. "Louis is not going to answer any questions," he was quoted as having emailed.

The comedian's accusers told the paper that his behavior was abusive.