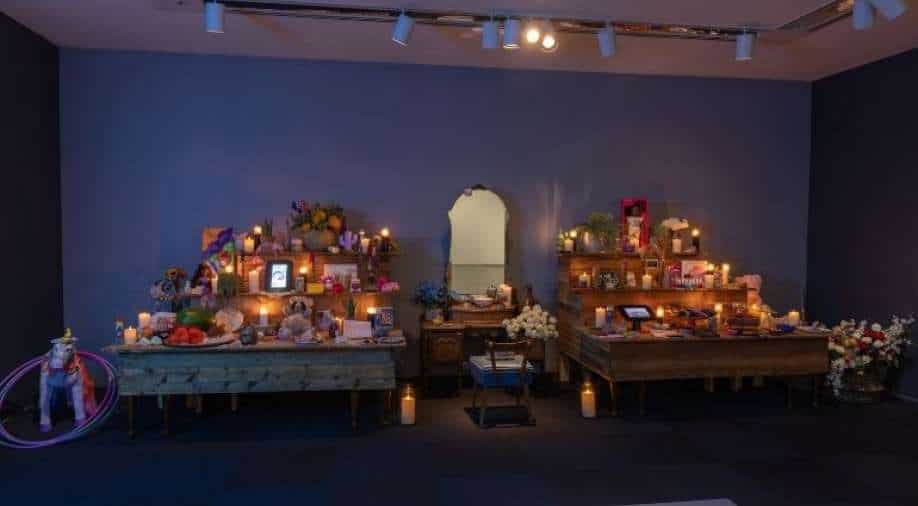 In an image provided by the museum, “The Black Girlhood Altar,” a temporary monument that had traveled through the city’s various neighborhoods, at the Museum of Contemporary Art Chicago. (Nathan Keay/MCA Chicago via The New York Times) Photograph:( The New York Times )

The Friday before Thanksgiving, as millions of people around the country started packing up cars and prepared to board flights to reunite with their families, about 20 guests gathered inside a quiet gallery at the Museum of Contemporary Art Chicago for a moment of collective mourning.

Toward the back of the room were two large wooden altars, with steps adorned with offerings meant to honor the lives of Black girls: satin hair bonnets, nail polish, a baby doll, children’s books. A video of a 16-year-old girl doing her bouncy hair on TikTok played on a loop. Candles, teddy bears and bouquets of flowers were placed throughout the display.

Together that evening were friends, family and supporters of Breonna Taylor, Latasha Harlins, Marcie Gerald, Lyniah Bell, Rekia Boyd and Ma’Khia Bryant (the star of that looping TikTok video, who was fatally shot by police in Columbus, Ohio, in April). Over the past several years, their names had become rallying cries in their communities — some far beyond — after their lives were cut short by violence.

“The Black Girlhood Altar,” a temporary monument that had traveled through various neighborhoods in Chicago before landing at the MCA as part of an exhibition of work by artist Andrea Bowers, was meant to honor them and the countless other Black women and girls whose deaths preceded the national reckoning that followed the murder of George Floyd in May 2020. Most of their lives had never been memorialized on such a grand scale.

“It’s taking trauma and reclaiming it for yourself and honoring the people in it,” said Scheherazade Tillet, a founder of A Long Walk Home, the national organization that sponsored the creation of the temporary monument. “The horror is in the trauma, and the beauty is in the spirit of the person.”

The altar was assembled by artists Leah Gipson and Robert Narciso, Black girls from the Chicago community, and Tillet. (Her sister and co-founder, Salamishah Tillet, is a contributing critic for The New York Times.)

In recent years, there has been a global push to remove statues and monuments of racist historical figures. At the same time, some artists have been galvanized to honor people from marginalized groups, including Kehinde Wiley, through his “Rumors of War” series, and a recent public art exhibition in New York City showcasing bronze busts of African American figures.

Sarah Elizabeth Lewis, an art historian and professor at Harvard University, said the commissioning of these statues as historical monuments are taken down signals “an expansion in the American narrative.”

“These new monuments signify that we’ve underestimated how rights and representation in U.S. democracy are tied to the work of visual representation,” Lewis wrote in an email, “which includes the signaling power of monuments in the public sphere.”

“We are in the midst of a profound reckoning about the true marriage of race, rights and visual representation for the broader work of justice,” she added.

In the gallery that chilly November night, the significance of a monument to the lives of Black girls was not lost on the guests. Juniyah Palmer, Taylor’s sister, did a lap around the room, then stepped outside to take a moment to herself. Evelyn Hightower lingered on the image of Lyniah Bell, her daughter, hanging from one of seven pendants on an adjacent wall dedicated to seven victims.

Kenneth Walker, Taylor’s boyfriend, said he felt moved by the display. “Just everybody’s vibe and mutual pain about all these different situations,” he said through a face mask with “Breonna Taylor” printed across the front. “You can definitely tell people really care all over the world.”

The evening before, the group had gathered for a private, family-style dinner at Taste 222, a restaurant in Chicago’s Fulton River District, along with youth members from A Long Walk Home, known as the Girl/Friends. Chandeliers and dimly lit candles illuminated the room as people took their seats at two long tables.

After opening remarks, a first course of kale salad with cranberries and sunflower seeds was served. There were notes of levity in what might have otherwise been a solemn gathering, as guests became acquainted with the space and the menu.

“I like salad with good ranch,” Walker said with a smile.

The evening had been billed as a night of connection and healing for the survivors, but for the most part they sat in pods, holding their unique, unspeakable losses close.

Elizabeth Gerald, whose 15-year-old daughter, Marcie, died by suicide in 2015 after being abducted and sexually assaulted, said that when she first started meeting with other mothers years ago in Chicago who could relate to her tragedy, she was taken aback by the divisions felt between survivors whose loved ones lacked name recognition and those whose stories had become the subjects of national news and protests.

“High-profile is like Trayvon and Sandra Bland, and Breonna Taylor is considered high-profile because of the media,” Gerald said. “But the low-profile are like the mothers who lose to police shootings that nobody knows about.”

“I think a lot of times it’s jealousy because they’re feeling like, ‘Well, what about me?’ ” Gerald continued. “It feels really good to be able to have something more small, intimate. Just us and the families helping each other, being there for each other.”

After dessert, the hosts took a moment to explain the history of the altar and its intention. Gift bags were handed to families, and each group was presented with custom beaded bracelets and lockets dedicated to their loved ones.

“Aw, it’s Breonna,” said an emotional Walker as he opened the locket to find a picture of his girlfriend. “This is really nice.”

At the end of the night, a microphone was passed around the room so that each attendee could share a wish for Black women. Their words echoed through the room like a benediction: “Protection.” “Freedom.” “Justice.” “Joy.”